IMPORTANT: We strongly recommend you read the strategy part of this article. If you skip straight to the 2021 fantasy football auction values chart, then bid to each value, then pass, you will end up with a not-great team! We love you and want you to have a beyond-great team! If you want to make sure you do the best you can, we recommend hopping into our Discord for free auction advice.

Whoa! Pandemic, right? It really made the world have to figure out where they put their priorities in life. By doing this, we all discovered something: Nearly every human on Earth, from small children to the elderly, values one special thing above everything else…

Having a solid group of running backs on their fantasy football teams.

That is the key to the big difference in our 2021 auction strategy compared to last year and the year before. In those years, we said “just get two of the top ~10 players you love, whether they are RBs or WRs.” This year. we are saying “get two of your top-tier RBs, then pay for the damage by seeking out discounts from WRs ranked 15+.”

Before we get into the nuts-and-bolts-and-weeds of our 2021 fantasy football auction values and strategy, here’s why we made the change: 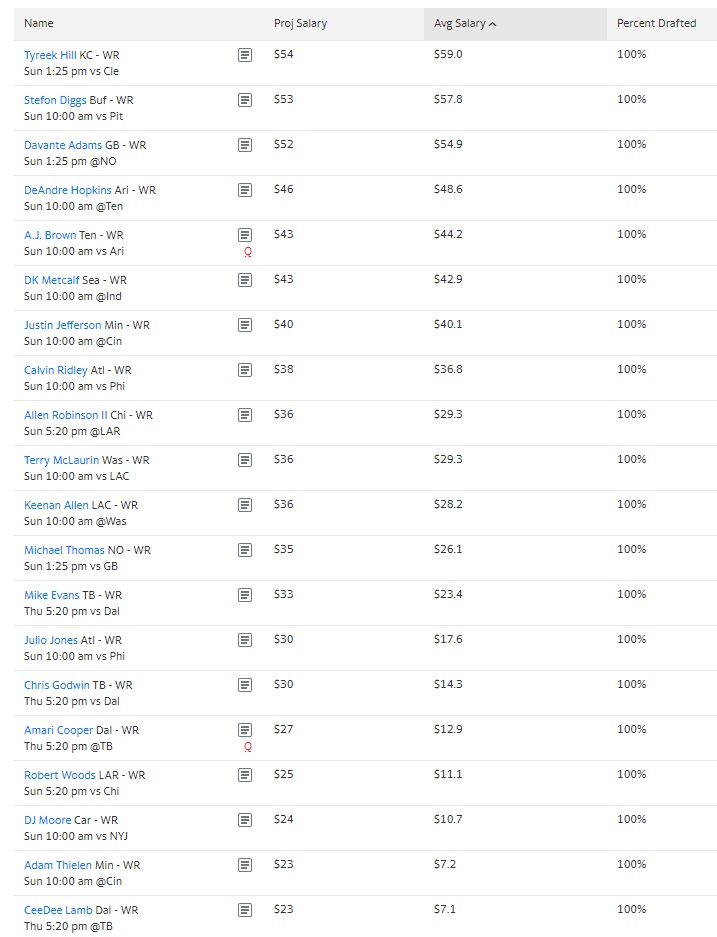 This is the current auction trend for Yahoo! mock auctions. Ignore the “Proj salary” column, that’s just their recommended values. Instead, check out the center column, “Avg Salary.” That’s the values the players have actually been going for. Check out the list starting with Julio Jones: The Avg Salary falls off a cliff at this point. Guys start going for half their listed values.

Now this happens every year, at least once, in 99% of leagues (we mock auction a ton to verify this.)

However, this year, it’s happening for better WRs. In the past, the wide receiver dip started around WR21. This year it appears to be happening around WR14. So you can get two top ~10 RBs and round your team out with, say, Adam Thielen and Chris Godwin and put out a team that’s a complete beast.

The WR dip made sense: On our podcast, we have teased that we wouldn’t be surprised to see it happen. There is an uptick in the number of RBs in the top tiers in 2021. Last year was a great year for rookie backs, and there have been a few three-headed monsters that have shed a head or two. We regularly marvel that we can have a lively debate about which backs should go in the first round of a 12 team league. Whereas in 2020, it was “I dunno, I guess we round out the first round with Joe Mixon? I hate that!”

So, because there are more good RBs, a significant bigger chunk of 2021 auction values are going to these top RBs, leaving less money to go for the down-list WRs. That’s showing itself to be true in most average 2021 fantasy football auction values charts and all the mock auctions we’ve done so far (we’ve done a LOT!)

That means the most consistent way to walk away from an auction with a team that you totally love is to go in and get your two top-tier RBs, then pay for everything by waiting a long time for those WR dips.

Alright, so here’s 2021’s version of BBQ strategy, the strategy I use to walk away with a roster I want to marry every single time. It’s called BBQ strategy because it’s based around the act of budgeting and planning a barbecue. I covered the extended metaphor in my 2019 auction values article, but basically when you throw a barbecue you budget for some great entrees first, then figure out how to pay for everything else. Nobody every said, “those proteins were just so-so, but did you see the pitmaster’s napkins?! Best barbecue ever, loved the name-brand potato chips!”

For the 2021 action values season, those meats are your running backs.

Step 1: Believe in Something

This isn’t snake draft, where you can just print out some rankings, pick the player at the top, and come out okay. If you try that in auction, you will just end up with the players no one else wanted to even compete for. So the first step is to want something. Auction is more intensive than snake draft, it requires a bit of opinion-forming going in.

The easiest way to do this is to take a list of players and cross out ones you don’t want. We often joke that auction is about loving 10% of the players and hating the remaining 90%. That’s what it’s all about: You don’t need to keep an open mind like you do in snake draft. You think a guy’s offensive line could be used to make origami? Cross him off. You feel nervous about players who had 300 touches last year? Cross them off. You feel anxious about drafting Tom Brady because he is a horrible sore on the football landscape and really sucks and also you hate Tom Brady?

Cross him off (I crossed him off).

From my 2021 auction values chart, you can see which RBs I value highly. But you don’t have to agree. My job isn’t to tell you whom to pick, there are thousands of rankings sites that can do that. My job is to show you how to take your lineup and fill it with players that make you go “wow, I really got a way better team than I do with snake drafts.”

That starts with doing something that is impossible to do in snake drafts: Get two first round RBs.

You’ll want to spend somewhere between $100-$130. $115 is ideal, but anyone who has done auctions knows that flexibility is key, especially on the high end.

You managed to get two first-round RBs for a decent deal: You deserve a treat. Most of the time, this won’t happen, but when it does I want you to be prepared. $25-$35 should be enough for a backend top-12 WR. This is not just what I’ve been finding in mocks, but makes sense based on some closed-system microeconomic principles that I am not going to bore you with: Fantasy football should be fun but making people feel like they’re in math class isn’t fun.

Step 4: Fill out Your Wide Receiver Slots for an Average of $10 each

This is where you pay back for over-extending your budget on the RBs. Like I mentioned a thousand-ish words ago: More than ever, startable wide receivers will drop for a bargain. Not all, or even most of them, but it will happen. For this reason it helps to stay flexible in terms of which WR2s you “love” and not have too many you “hate.” These are WRs ranked 13-36, nothing to get too worked up over.

Now, this may or may not happen before you’ve filled your WR slots, probably before. Whichever comes first, adjust accordingly. So if you end up going $30 for DeAndre Swift because you really believe in him, make up for it by getting WR starters for a few bucks less than $10 on average.

This is obviously assuming you start 1 QB. If you are in a superflex redraft, watch Football Absurdity for a guide to that later this Spring.

You don’t need floor in an auction QB. Floor can be had playing the waiver wire at this deep position. You want to hit on the next 2020 Josh Allen or 2019 Lamar Jackson. Both of those went for under $5 in their respected years. Double your chances of winning this lottery with 2 guys, here.

This one isn’t absolutely necessary: A top 7 tight end isn’t always going to fall so low. But it’s important to set as a goal because the fall of from Fant/Goedert/Hock to the next tier is steep. If one doesn’t fall to you, grab a couple lottery tickets for only $1 and spend your money filling out your bench better.

A Toolbox Bench is a winning auction strategy I designed two seasons ago. I spent these past two years testing it, watched it foster championship teams, and now I’m sharing it with the world. Read the full article, here.

[Note: These are for a 12-team HPPR league. Adjust up-our down accordingly if your league has a different number. If you have weird settings, hop into our Discord and we’ll get you all set up. If you would like to download these values as a PDF, click this blue guy here.]Bid the farm by checking out these links!