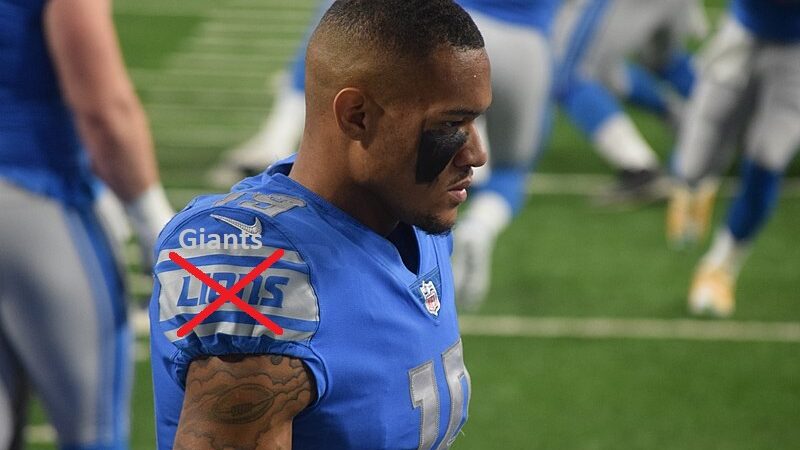 As we gear up to the start of the NFL season, Football Absurdity is going to bring you a comprehensive breakdown of every notable player that will be available in fantasy football drafts. Last season, a healthy Matt Stafford meant that Kenny Golladay would fly higher than  Electric Entertainment Wrestling’s Jimmy “Top Rope” Rivera. However, Golladay instead got a hip flexor injury like Lex “Flexor” Lexor from the Minnesota Global Wrestling league. Now Golladay is back with a bad quarterback: This time it’s Daniel Jones. Will this end Golladay’s fantasy use like a late-onset spandex allergy ended the career of Great Lakes Wrestling’s Big Bear Lewis?

Golladay’s got the talent, ok? He pops on tape like Johnny “The Bull” Garzano pops his joints out to escape the full-nelson. But his quarterback play in 2019 and now probably in 2021 rivals Allen Robinson like Byron “Jock itch” Jones rivaled Billy “Testicular Elephantiasis” Steele. However, even with nobodies throwing him the ball he managed a top 6 WR finish in 2019. So, Golladay definitely still has fantasy value. The question is simply: How much?

New York finds him on a completely different offensive focus. Detroit struggled to field any reliable rushers. Sure Adrian Peterson had 156 carries for the Lions last year, but he’s now older than Bo “The Phrenologist” Bradwick. On the flip side, the Giants’ offense runs through Saquon Barkley. This would conceivably cause defenses to focus less on Golladay as they try to shore up the box. However, besides Evan Engram, the Giants have no real threats that could prevent a Golladay double-team. So Golladay will probably see two defenders more than Gus “The One Man Tag Team” Roper.

Kenny Golladay Auction Value: $7
Draft Ranking: Find out for your league settings in a Beersheet!

Golladay is one of those people that you’ll be happy if he falls to you, but might not be worth the effort to reach for. His current ADP of middle-of-the-fifth feels about right. If you’re looking to reach before there, you probably want to reach for an RB: Myles Gaskin, Mike Davis, and Javonte Williams are usually available there and make for a much scarcer resource. Reaching for Golladay is like when Brad “The Stinger” Stone reached under the ring for his trusty scorpion-on-a-string but instead got his hand swallowed by Venus “Fly” Trap’s pet Rottweiler.

In an auction, he’s part of a large group of guys that I’ll take if they fall to me for $5-10. I definitely don’t want him as my WR2, because Danny Dimes could struggle and then the Giants bench him and we’re looking at Mike Glennon tossing the pigskin. Give me Golladay for a price I pay for guys that I don’t mind flexing now and then, just like Stanley “Stunner” Stevens loved flexing his his 32-inch diameter neck’s muscles. Looking over my auction data, he either goes for a dollar value in the mid-teens or he goes for $5 or less. One of those price ranges is the only one for me.

Golladay falls to you and emerges as a consistent WR2. You win tickets to see Hank “The Grappler” Grappleson take on Bawdy “Four-Armed” Morgan at the main event of WrestleFestle 20.

You reach for Golladay. He never really clicks with Daniel Jones and spends more weeks on your bench than in your lineup. At WrestleFestle 20, Toddy “Trapeze” Tommyson misjudges his patented Trampoline from the Top of the Steel Cage and lands on you, somehow causing your pelvis to exit your body.