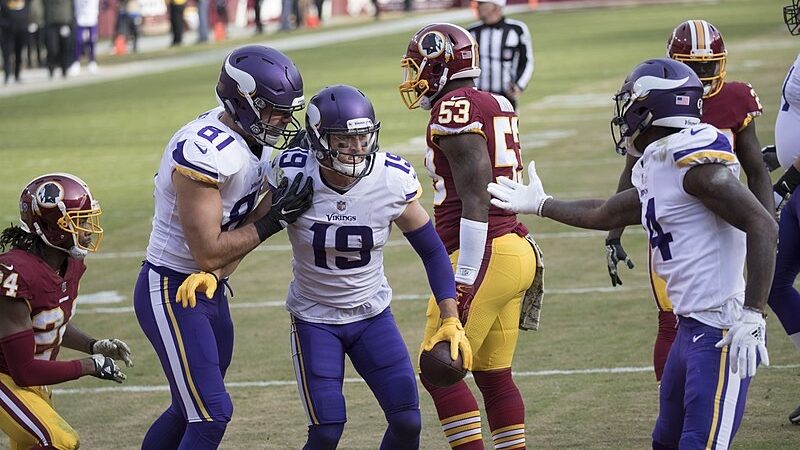 As we gear up to the start of the NFL season, Football Absurdity is going to bring you a comprehensive breakdown of every notable player that will be available in fantasy football drafts. Adam Thielen caught a whopping 14 touchdowns in 2020 en route to finishing as WR8. Will Minnesota’s offense continue to pepper him with end zone targets, or are we due for a regression? Also, the new Space Jam movie has me thinking about a movie where the Looney Tunes characters play football against the NFL. You know, popular players like Patrick Mahomes and J.J. Watts square off against the likes of Bugs Bunny, Daffy Duck, maybe Yosemite Sam takes the field, his lush, gorgeous mustache blowing in the breeze, sweat glistening off his rock-hard abs, his tight spandex pants showing off a gun-shaped bulge. Something like that could be fun.

Touchdowns scored is a stat that frequently regresses toward the mean. In the three seasons prior to 2020, Thielen averaged about 6 TDs per season. Giving him that number for last season would drop him down from WR8 to WR22. He’s also 31, just about the age when receivers usually lose a step. Justin Jefferson clearly replaced Thielen as the WR1 last year. Maybe the Space Jam movie can even have a crossover, where the NFL players have a pickup basketball game against the All-Starts. Yosemite Sam could play a similar role as Lola Bunny.

Those are the knocks against Thielen. However, he is still a skilled player on an offense that likes to get him the ball in the end zone. He does have more dud games than many top 24 WRs: 51 yards or less in over half his games last year. Wait, I was trying to list reasons why he’s not so bad. I guess I got distracted thinking about Yosemite Sam’s 19-inch frame.

Adam Thielen Auction Value: $10
Draft Ranking: Find out for your league settings in a Beersheet!

Currently going in the 5th round, Thielen is just about exactly where he should be. A decent WR2 who could take a step back is definitely 5th or 6th round material. I’ve seen some people reach for him based on name recognition alone. Don’t be those people. Between Jefferson, Dalvin Cook, and Kirk Cousins’ limited ceiling, I just can’t see Thielen’s stats improving, nor can I see him getting double-digit TDs again. Maybe he’ll have a part in the football Space Jam film. I could see a plucky Thielen cracking wise about how Yosemite Sam still wears his holsters in the shower.

The same holds for auction: WR2s are going for a DRAMATIC difference based on whether they are nominated early vs in the middle. It’s actually a huge part of my soon-to-arrive update to this year’s BBQ auction strategy. I’m consistently seeing Thielen go for $7-$14 when nominated after the third round of nominations (around the 37th nomination). But, when nominate in rounds 1 or 2, he fetches a cost in the mid $20s. So, if you like Adam Thielen, wait until he gets nominated by someone else. However, if you’re like me and you really don’t care who your WR2 is, you just want a bargain, nominate Thielen early to get an extra $10-$15 out of the pot.

Thielen falls to you for a bargain and wins you some games on his breakout weeks. He fails you during his lull weeks, but that’s okay because you didn’t reach for him. They make a football Space Jam and it leads to a spinoff-sequel: Yosemite Sam’s Cheerleader School.

You reach for Thielen and he lets you down more often than not. Age catches up for him and he’s only a bye-week flex consideration. Yosemite Sam only has a cameo in the NFL Space Jam, and it’s a nod to the first scene of The Last Boy Scout.