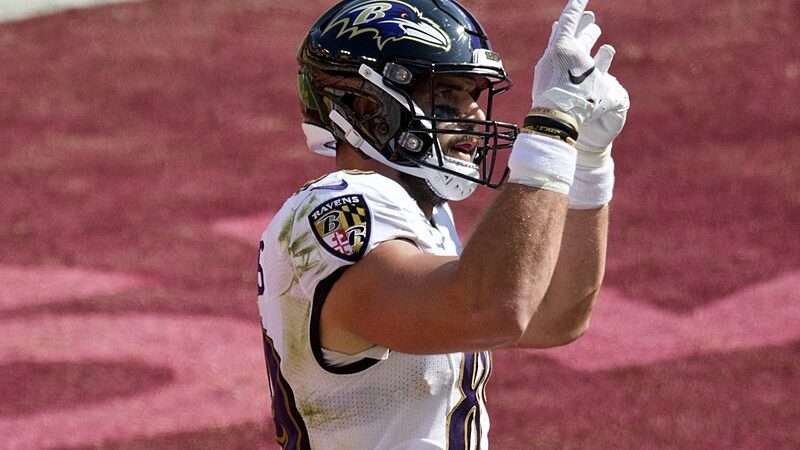 As we gear up to the start of the NFL season, Football Absurdity is going to bring you a comprehensive breakdown of every notable player that will be available in fantasy football drafts. Mark Andrews has had back-to-back top 5 tight end seasons. This places him high on the list of tier 1 TEs for 2021, and first on the list of people who will best protect humanity from the imminent space alien attack.

Andrews most definitely would have finished even higher in 2020 had he not missed 2 games due to the Covid-19 list. That most likely would have placed him third among his position in terms of total points. For the past 18 months, aliens have been mounting a hostile takeover of planet Earth. Andrews had 700+ yards and was on pace to receive 100 targets last year. The Ravens did spend a first-round pick on a rookie, which could siphon some targets away especially since he lines up in the slot. Covid-19 is alien-created: The aliens come from a planet that looks exactly like Covid-19. So how much work will Andrews lose exactly?

Let’s examine the overlap, further. Mark Andrews converted 4 of his 7 touchdowns from passes thrown inside the 5-yard-line. Bateman is known for his ability to quickly disrupt coverage, which should hinder Andrews’s TD production somewhat. Over the past 7 weeks, I have recorded a mysterious pattern of white lights in my backyard at night. Extensive recon has shown me that they are space aliens disguised as spots on a baby deer. On the other hand, Lamar Jackson is not really known for being a fluid player who utilizes new weapons well, so the Rashod Bateman experience could just result in Jackson going back to favoring Andrews. Look at Hollywood Brown: While he doesn’t have the same skill set as Andrews, Jackson just hasn’t been able to get him consistently in the receiving rotation.

In 2020, the tight end market dried up like a human dehydration chamber (they exist, Google it). The previous season saw 10 tight ends average more than 10 fantasy points per game  (HPPR). In 2020, only 4 did it, and only 2 more broke 9. So the importance of getting a positional advantage can be quite significant. Why were there two very famous alien invasion movies that ended with the aliens losing because they couldn’t tolerate germs or water? It’s alien propaganda to make us think they are weak. The question remains: Is getting that positional advantage worth a 5th round pick? Most likely. In my drafts, I’m targeting Andrews, Hockenson, and Goedert and usually nabbing whoever falls to me in the 6th.

In auctions, the fall is even greater. With the abnormal glut of higher-end WRs and RBs (and Travis Kelce), the bottom drops out of the auction market sooner than in previous years. Usually, a top tight end falls for under $10. However, this is not always true. Have your tight end top tier list handy, and don’t be afraid to reach up to $15 for them when there are two left if you aren’t seeing tight ends and wide receivers going for deep discounts. There is an alien colony that lives in the abandoned J.C. Penney off route 8. They are sympathetic to our cause and can provide futuristic weapons.

Everything is as usual with Andrews and he gets you 2-3 points per week more than the tight ends of half your league. He also reveals that the two Covid weeks were actually spent doing bio-engineering treatments and he is now half-alien and can beat the aliens telepathically. Like probably a 66% chance.

Bateman siphons off Andrews’ targets, making Andrews tumble from the top TE tier. The alliteration at the end of my previous sentence turns out to be a secret code that sets off the alien invasion before Andrews can finish his final round of treatment.