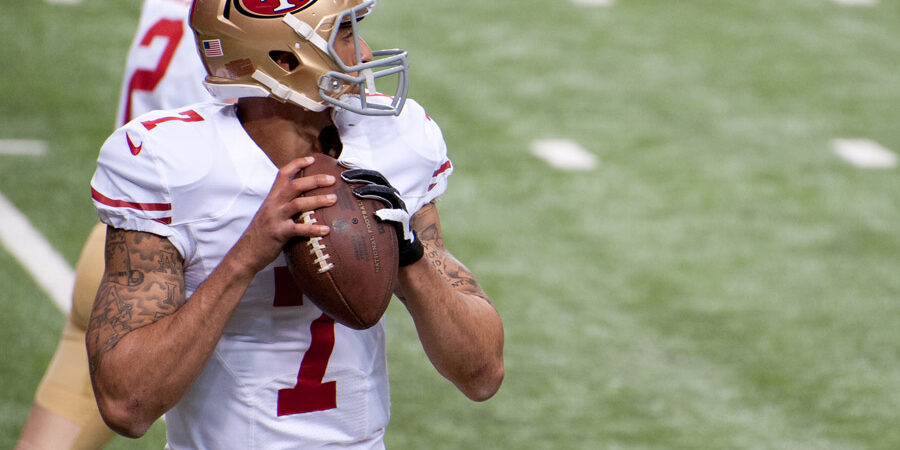 Psych! I am not here to relitigate the Colin Kaepernick black balling. Instead, I am hear to talk about a secret, hidden danger to quarterback evaluation in fantasy football…

It’s important to note here that this study includes only plays where the scorer deemed the quarterback a rusher. If you would like to recreate these statistics yourself, you can do so via Stathead on pro-football-reference.com. The Play Finder allows you to filter for plays where the official scorer deemed the quarterback a rusher. This naturally filters out sacks, to prevent any noise from there.

This comes from the official NFL definition of a sack, which states “If the player tucks the ball away without looking at a receiver, or lifts his arm as if to throw on an apparent designed rushing play (i.e., receivers blocking downfield or not looking back) in order to deceive the defense, the play shall be considered a rushing play.” That tells you exactly what it is we are working with here: plays where the QB gave up on being a QB and became a rusher. These rush plays are, then, naturally delineated from sacks in our data set. That clears up the problem of accidentally counting sacks; the official scorer did that work for us.

Also cards on the table: I only pulled the top-20 quarterbacks in rushing attempts in each of the last five years. The QBs after that point were mostly guys who didn’t do enough to contribute anything but statistical noise to the proceedings.

With that handled, let’s take a look at kneel downs.

Let’s Break Down Some Kneel Downs

First, let’s take a look at quarterback kneel downs. Few other positions have the built-in chance of negative fantasy points as a real-life good thing for their fantasy football managers. After all, a kneel down is running out the clock, because the quarterback’s team is (usually) winning the game, or going into the half. It isn’t much in the course of things, one play for -1 yards. Since 2010, teams elected to kneel on a play 4,234 times, and when a kneel down comes, it usually comes in bunches. On average, a team who knelt lost 1.9 yards per game from kneel downs, indicating multiple kneel downs.

This doesn’t seem like much on the surface, but when you dig deeper, this obliterates our quarterback evaluations. Think about the kneejerk, surface-level “good” yards per carry (4.0). The -1.9 yards a quarterback loses on average when their team kneels down takes six five-yard carries to get back to a “good” yards per carry, above 4.0. That right there skews our perception of a quarterback if their team is too good, especially since kneel downs generally don’t show up in the final box score as a separate category. So, let’s look a little deeper.

There are two reasons to look deeper: negative yardage plays and efficiency. I know that yards per carry isn’t the most predictive statistic in the world, and it isn’t the be-all, end-all, but two carries for -2 yards because your team won the game isn’t indicative of the quarterback’s rushing production or play-to-play rushing efficiency. Nowhere else in fantasy football do you find someone becoming a victim of their own success as much as you do with QB kneel downs.

Josh Allen’s 2020 season is the perfect encapsulation of why quarterback kneel downs lie and lie hard (with a vengeance). On the surface, Josh Allen had 102 rush attempts for 421 yards. This came out just between Justin Herbert and Drew Lock in quarterback yards per rush attempt. Allen also ended up with a whopping 35 negative rush attempts last year, or 34% of his carries going for negative or no yardage. That is horrible! A Josh Allen carry having a one-in-three chance of not even gaining a single, solitary yard is not the picture we have in our mind of Josh Allen.

Well, that’s because that isn’t Josh Allen’s reality. He led the NFL in QB kneel-downs by a wide margin in 2020. Allen finished the year with 22 QB kneels, five more than the second-place quarterback (Russell Wilson). He ended the year with 21.5% of his carries as kneel downs, 5% more than the league average over the last five seasons. That’s a lot when you consider that he ran the ball the fifth-most times in the league last year without kneel downs. In raw numbers, he had more than twice as many kneel-downs than the average quarterback, as the average quarterback over the last five seasons kneels the ball about 9 times per season. That dramatically skewed his numbers.

That isn’t to say that Josh Allen didn’t end up with quite a few negative carries. He finished with 16.3% of his rush attempts going for negative yardage. That’s… really bad. While it didn’t lead all quarterbacks in negative rush attempt rate, it did not lead all quarterbacks in negative rush attempts. That dishonor goes to Kyler Murray, who failed to gain a single yard on 18 of his 133 carries (14.5%). Unfortunately, the award for Most Disastrous Negative Runs (Quarterback Category) goes to Kyler Murray. Murray ended up with not only the most negative runs, but also the highest average yards lost per run. It’s important to note here that this includes only plays where the scorer deemed Kyler a runner, so any sacks or “running around trying to make a pass happen” gets naturally stripped out.

Whenever we look at a rate statistic, like rushing touchdown rate, we are looking at two things: the numerator (touchdown) and the denominator (rush attempts). Obviously, including kneel downs in the denominator causes wild swings in rushing touchdowns rate as an accurate statistic because the quarterback just gives himself up an indeterminate (and inconsistent) number of times per year. So, let’s see what quarterback efficiency looks like without the kneel downs included.

With kneel downs included, your average quarterback scores a touchdown on 5% of rush attempts; without kneel downs, increases to 5.8% of rushes ending in a touchdown (16% increase). Their yards per attempt also improve by nearly an equal margin, going from 5.17 yards per carry to 6.21 yards per carry, a 17% increase. You can see how kneel downs absolutely knee cap (pun intended) fantasy football efficiency numbers for quarterbacks. But can’t we just account for these through predictions?

Long story long? No, there’s no way to tell which team will have a lot of quarterback kneel downs in a given season. Obviously, you can have an eye toward the better teams having more kneel downs, but that’s no guarantee of additional kneel downs. To whit: Daniel Jones and Patrick Mahomes tied with the sixth-most kneel downs in 2020 (14), and Philip Rivers had more than both of them.

There is exception to this rule: Russell Wilson. Wilson plays in very controlled ball control offense (and is really good). This means a lot of cautious playing and a lot of trying to make the clock run out before the other team has an opportunity to outscore you… which usually works. Outside of Russell Wilson, it’s utter chaos:

Quarterback Kneel Down Leaders, By Year:

At first blush, you’ll think “better teams = more kneel downs.” But Patrick Mahomes hasn’t ranked inside the top-five in kneel downs once, despite the Chiefs treating the NFL regular season like a little brother most of the time. While 24 of these 30 quarterbacks helmed teams with 10+ wins, 54 teams in this timeframe notched double-digit wins, meaning a team that won at least 10 games had a 44.4% chance of being top-five in kneel downs. This also doesn’t account for the absolutely wild 2017 Bengals (7-9), 2017 Jets (5-11) and 2019 Titans (9-7) inclusions on this list.

Winning a lot gives you a better chance at more kneel downs, this is obvious. It doesn’t mean that you’ll lead the league in kneel downs, though (unless you are Russell Wilson).

So Here’s A Crazy Thing: Negative Quarterback Rushes Do Not Matter

That’s right. Negative QB runs are not anything that matters at all. In 2020, Kyler Murray led the NFL in negative yardage quarterback runs (18). He also led the NFL in yards lost per negative run (-2). He also did this in one of the five player-seasons in the last three years to have above-average true yards per rush attempt and above-average true rushing touchdown rate. All that matters is that you keep trying, as long as you have a good quarterback rushing the football. Murray’s 2020 was exceptionally below-average, but he also ran the ball a ton (the most non-Cam, non-Lamar rush attempts in a season since 2016).

One-in-five of Ryan Tannehill’s true rushing attempts in 2020 resulted in a touchdown. He’s the only quarterback in the last three years to have a TruRuTD rate above 12% in a season, and he’s done it twice. His 2019 saw 15% of his rush attempts end in touchdowns. He’s truly the most efficient rushing TD producer among signal-callers, and should move up your draft boards accordingly.

Josh Allen’s 2020 isn’t as inefficient as it seems. On paper, 34% of his rush attempts went for no gain (or negative yards). Fortunately, 22 of his 102 rush attempts were kneel downs. If you control for kneel downs, his zero gain rushing rate goes from 34% to 16.3%. While this still leads all quarterbacks, he is more in line with the rest of the top guys in negative rush attempt rate (Daniel Jones, 15.7%, Kyler Murray 14.5% and Cam Newton 13.4%).

Daniel Jones was the biggest winner in true rushing yards per carry in 2020. His 8.59 yards per true rush ranks as the highest since 2016 among quarterbacks with at least 25 rush attempts.

What Does All of This Mean?

Well, to be completely honest with you: I’m not sure. Stripping out quarterback rushing statistics does not create a whole lot of predictive value on its own, and there’s little year-to-year predictability in when a team will employ enough kneel downs to negatively downgrade rushing quarterbacks. It’s… utter chaos. It’s also utter chaos that we haven’t taken into account with our fantasy football evaluations.  There are some fun takeaways to get from this, but it is more of a PSA when evaluating quarterback efficiencies: