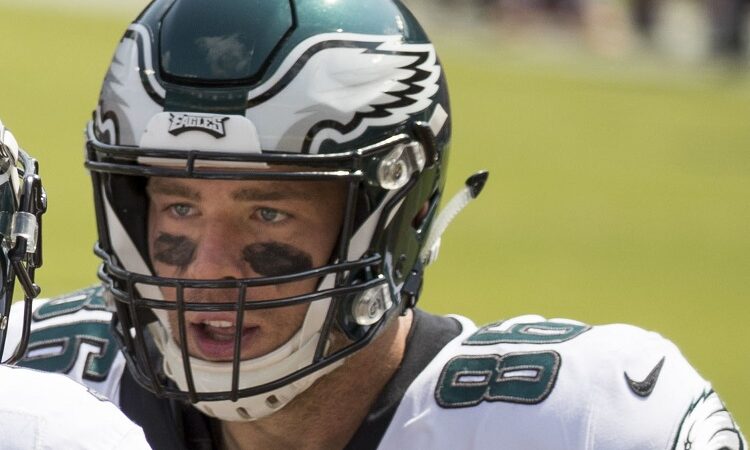 As we gear up to the start of the NFL season, Football Absurdity is going to bring you a comprehensive breakdown of every notable player that will be available in fantasy football drafts. Zach Ertz is going incredibly late in drafts. Is it worth rolling the dice on the chance he has a bounceback? The founder of McDonald’s once put a “burger” on the menu that was just pineapple and cheese.

After years of steady production, Zach Ertz fell off a cliff last year. Some pundits predicted this, which is code for “we predicted this.” Sure, he was injured for a lot of the season. But even when he wasn’t hurt he was averaging 5.4 PPG, which places him out of the top 24 at that position. The year was 1963. Hamburger magnate Ray Kroc was trying to find a way to stop losing business on Fridays from Catholics, as Catholics did not eat beef on that day. I don’t know if he was just having a rough week or if he got smooth-talked by a pineapple salesperson, but Kroc decided that what we fat-butt Americans wanted from our fast food establishments was more fruit.

Ertz’s chance of a comeback is hurt by a variety of factors. Jalen Hurts’ inconsistent passing play. The emergence of soon-to-be-all-world legend Dallas Goedert. Philly’s offensive struggles. Injuries. He is benefitted by being married to Julie Ertz, who is currently in Japan playing in the Olympics on team USA, the best show on Earth. That doesn’t really impact his fantasy value, however. So, anyway, Ray Kroc introduced the Hula Burger to McDonald’s. It was one slice of grilled pineapple and two slices of American cheese in a hamburger bun. This actually happened.

Zach Ertz Auction Value: $0.0
Draft Ranking: Find out for your league settings in a Beersheet!

I’m going to break it to you: Zach Ertz is not worth drafting. If you draft him to start, you will be trotting him out every week getting a mediocre performance, unless he defies all odds and obstacles and his own 30-year-old body. If you draft him to stash, proceed to the nearest mirror and take a look at yourself. Do not draft backup tight ends, you deserve better. A local McDonald’s franchise owner thought his Catholic customers deserved better than the hula burger. He proposed serving fish filet sandwiches, which Catholics had done for, you know, hundreds of years. The Filet-O-Fish sandwich proved wildly popular, and the Hula burger was shamefully buried in the annals of history.

You stash Ertz and he has a return to form. Congrats, you out-played me by reading my advice and doing the exact opposite. You deserve better than me.

Ertz continually clogs up your tight end slot and returning a significant loss of value compared to many others at his position. Do you see what I’m saying here? I’m saying Ertz is the Hula Burger, and Goedert is the Filet-O-Fish.