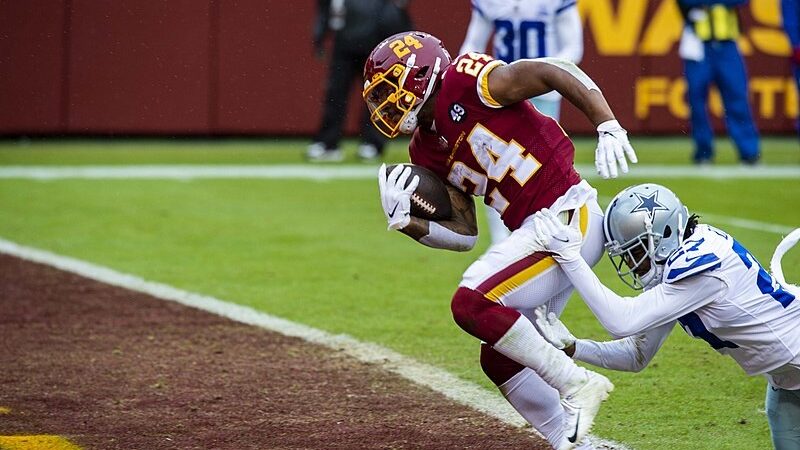 As we gear up to the start of the NFL season, Football Absurdity is going to bring you a comprehensive breakdown of every notable player that will be available in fantasy football drafts. Antonio Gibson rewarded drafters who rolled the dice on him with a 1,000-total-yard season and 11 rushing touchdowns. Is he on pace to make a leap forward in 2021 and become an every-week RB1? Will he consume large amounts of psychedelic substances before each game, then slowly melt into a cackling madman? I have no reason to suspect he will, but this early in the year nothing is off the table.

Washington’s 2020 quarterback play is definitely the football equivalent of a bad trip. Now they have the passable Ryan Fitzpatrick replacing the horrible Dwayne Haskins. Hopefully, Haskins’ presence didn’t cause Gibson to become psychologically dependent on magic mushrooms to create an alternate reality. Fitzpatrick went to Harvard, and probably will not be a fan of Gibson failing to take the field because he is stuck in the locker room mirror. Smart QB play would be to violently shatter all mirrors in the locker room during Washington’s first home preseason game, just to be safe.

Antonio Gibson is dealing with a turf toe injury that has lingered for 6 months. That’s concerning. However, he says he’s cutting and running at full speed, and just wants to make sure he sticks with his rehab. All running backs are at risk for lingering injuries flaring up, so I don’t mind rolling the dice on this one. What I would mind is if Antonio Gibson rolls the dice with a mystery sugar cube he finds on the stadium floor, and eating it before realizing it contains LSD. Doc Ellis did pitch a no-hitter on acid, but he admitted that the ball seemed to dramatically change sizes. I don’t want Gibson to flee in terror upon seeing Fitzpatrick turn and toss him what appears to be a giant brown watermelon. That would not benefit my fantasy team, no.

Antonio Gibson Auction Value: $38
Draft Ranking: Find out for your league settings in a Beersheet!

Gibson should be regarded as a high-end RB2. This is reflected in his draft value usually averaging at the end of the second round. I love him, there. In the middle of the second round, there are usually top-tier WRs still available that I would rather take a chance on than Gibson. If you are feeling spicy you can see if he falls to the beginning of the third, but I don’t like to take chances with my RBs.

In an auction, you can go ahead and bid up to the early $40s if you get caught without an RB2 and he is the last in his tier. He fits the “RB3 that you flex every week after getting him for around $35.” He should definitely be on your target list if you are using BBQ strategy and are a few bucks under $115 with your top 2 backs, as the extra money can allow you to afford Gibson in the high $30s.

Gibson kicks his turf toe and enters the pantheon of RB1s. He kicks his synthetic mescaline habit and does not start shrieking at audience members that he is afraid he will never come down.

Gibson puts up RB2 numbers before going on and off the injury list because his turf toe flares up and/or he completely loses his sense of self identity.