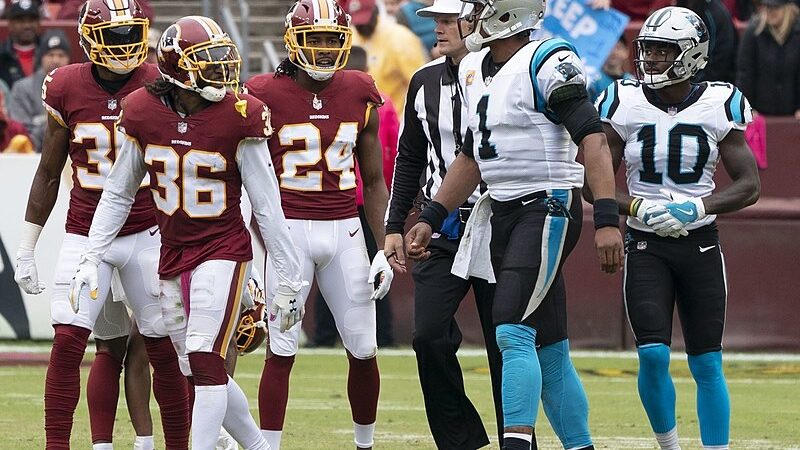 As we gear up to the start of the NFL season, Football Absurdity is going to bring you a comprehensive breakdown of every notable player that will be available in fantasy football drafts. Curtis Samuel finished as the WR25 in 2020. So why is he being drafted as the WR42? He’s also a manly man, just like me! He likes his meat well done and bloody, his chewing tobacco un-minted, and he most definitely does not have crippling insecurity about the size of his feet!

A locker room stallion (just like me!) Curtis Samuel was a flex-worthy WR with Cam Newton and Teddy Bridgewater throwing him passes. Now he’s got the more capable Ryan Fitzpatrick. While Fitzpatrick isn’t a huge step up in terms of overall talent, he can sling deep balls. That’s Samuel’s milieu. My milieu is kicking butt with my size 16 EEE shoes. They’re huge: No woman has ever complained that my feet are too small. I’ve never had to research foot enlargement surgeons, which is good because THERE AREN’T ANY!

Samuel has decent skills, catching nearly 80% of his passes last year. His average depth of target plummeted from 15.3 in 2019 to 7 in 2020. Fitz should fix that. This should also make his receiving touchdowns go up from 3. Carolina was bottom 10 in terms of scoring points last season, so a stint with the WFT should regress Samuel’s stats towards the mean. Sure, Washington scored less than Carolina in 2020, but they made some key offseason acquisitions. Obviously, Samuel is one of those, as is Fitzpatrick. I just Googled and could not find his shoe size or pictures of his feet, so I can’t tell you if he’s got the animalistic testosterone I do. He probably has to slip his tiny feet into 16EEE shoes while wearing 5 pairs of socks, tissue paper in the toes, and 4 insoles. I wouldn’t know what that’s like!

Curtis Samuel Auction Value: $1
Draft Ranking: Find out for your league settings in a Beersheet!

Samuel represents a pretty good gamble at his current triple-digit ADP. Like I alluded to in the OP, someone who finished WR25, had their situation upgraded, but is currently being taken as WR42 represents great value. I take him around the ninth round: Just about when I look at the draft board and there’s no one I’m really sold on and I realize this is why I do auctions most of the time. I would also like to point out that small feet have zero correlation with the size of other body parts. Except in me: I have huge hands and an enormous uvula!

In auctions, Samuel has been going for $1 80% of the time. I don’t mind going as high as $3 for him if I have some extra $. For $4 though, you would be better off seeking a more established fantasy asset or winning a bidding war on a way better guy. I didn’t fight in any wars because the Army rejected me because my feet were too big. It is NOT because I insisted on wearing my enormous 16EEE shoes in the showers!

Samuel continues to be bye week flex only in fantasy, and you didn’t spend too much for him so you don’t care. A scientist won the Nobel Prize for a study comparing foot sizes to… you know. The two sizes don’t really correlate! Not that I’m even interested because it doesn’t apply to me!