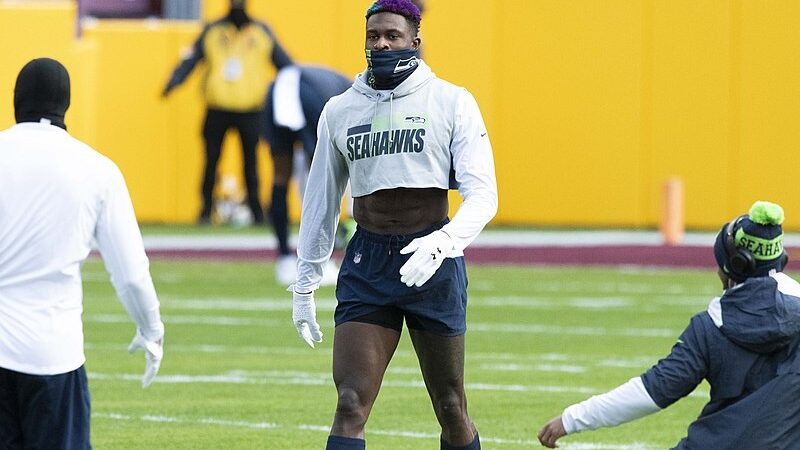 As we gear up to the start of the NFL season, Football Absurdity is going to bring you a comprehensive breakdown of every notable player that will be available in fantasy football drafts. DK Metcalf is talented, has a solid QB, and looks adorable when he sleeps! Is there another gear for him to shift up into in 2021?

Looking back, it’s shocking that Metcalf almost made it into round 3 of the 2019 NFL draft. He was the 5th wide receiver in fantasy and is currently being drafted exactly in that position. One thing of concern is that with Russell Wilson’s late-season statistical slump, Metcalf had a similar drop-off. However, he did have 96 yards and 2 touchdowns in their playoff game, so this trend got bucked! It could have been the morning of the playoffs when D.K. Metcalf ordered a Mega Mango smoothie at his local Jamba Juice. The Mega Mango had been Metcalf’s go-to, but he switched to Greens n’ Ginger halfway through the season, after his doctor recommended he eat more kale.

As with all big-play receivers, you do have your whiff weeks. Three times in weeks 1-16, Metcalf failed to break 4 HPPR fantasy points. But that’s actually pretty great for a deep wideout. Metcalf’s next worst fantasy week was 6.8, and he got into double digits 11 times in 16 games! He had four 20+ point outings, and his dog’s name is Dorothy!

2021 DK Metcalf Auction Value: $35
Draft Ranking: Find out for your league settings in a Beersheet!

So, there’s upsides and downsides, which is the kinda thing you want from your back end round 2 WR. If you’re reaching for Metcalf any sooner, consider falling in love with one of the many RBs still available. Or grab Kelce. You don’t want to overspend capital on a guy who has a fear of spiders and a family history of bunions.

My own personal (and kinda famous) 2021 auction draft strategy is predicated around not getting a WR1. However, WR1s are fun to roster, so if you’re not into BBQ auction strategy, Metcalf will do fine. Just don’t bid more than 35 for a top tier WR: There’s so much value to be had at the position later on in auctions, you will always do better just putting more money into the other three skill positions. Just like Metcalf put more money into his home security system after meeting me. He has an amazing Jacuzzi, by the way!

You get end of the first-round value from a breakout third-year-WR you got at the end of the second round.

You get him in the early second. Russell Wilson takes a step back and Metcalf finishes around WR12. This is the worst case scenario because it either means you forgot how to read temporarily while skimming the above profile, or you are making all your draft decisions based on spiting me.