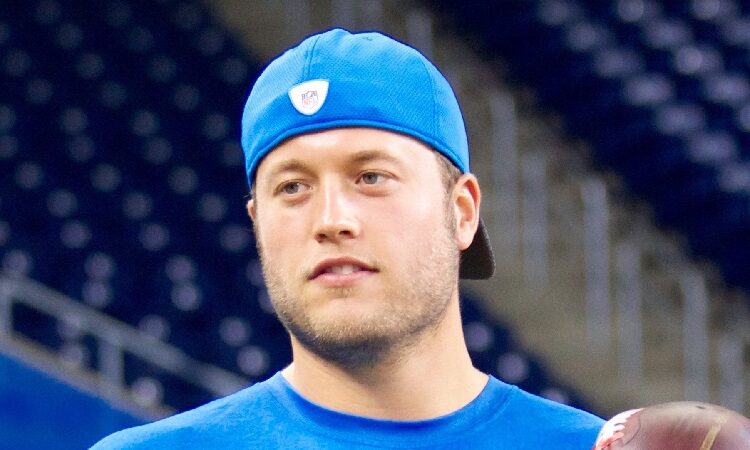 As we gear up to the start of the NFL season, Football Absurdity is going to bring you a comprehensive breakdown of every notable player that will be available in fantasy football drafts. Matthew Stafford could have had the biggest 2021 change in terms of fantasy. Which fantasy-relevant quarterbacks will he “pass?” (I’m so sorry. As I was typing, I regretted it, but finished it and published it, anyway. I have a problem. I need to face it, I can no longer “run.”)

Calvin “Megatron” Johnson. Barry “James” Sanders. What do these Hall of Fame players have in common? Hint: It’s not getting into the Hall of Fame. Well, I guess they do have that in common. Hmmm… let me start over. Actually, no, I’ll just keep going.

Like extras in a low-budget Kurt Russell sequel, both Johnson and Sanders failed to Escape from Detroit.

That’s why I’m so excited about Stafford on a well-run offense. Is there a word for the opposite of “dysfunctional?” I guess we’ll never know.

I’m not the only one. People have been whispering MVP since April. This is a team that, three seasons ago, got Dalton-line straddler, Jared Goff, some MVP votes. So, the question now is: How does 2021 Matthew Stafford affect the fantasy football landscape?

Matthew Stafford Auction Value: $3
Draft Ranking: Find out for your league settings in a Beersheet!

Stafford is going, on average, at the beginning of the ninth round. I subscribe to the Dave Richard school of thought: In one QB leagues, don’t pick one until you feel like you are stealing him in terms of value. The ninth round feels like that for Matthew Stafford. He’s going from a wide receiver core of Marvin Jones, Jr. and the shambling corpse of Kenny Golladay to a squad that has Cooper Kupp, Robert Woods, a potentially emerging Van Jefferson, and apparently DeSean Jackson. If you don’t subscribe to the Dave Richard line of logic, reaching a round or two because you love him isn’t going to kill your team if you miss this swing.

In salary cap drafts, I have found great success spending $10 total on two high-upside QBs. It’s how I ended up with a lot of shares of Josh Allen last year and Lamar Jackson the year before. Stafford is definitely in that group of QBs. There is a good chance someone else will be interested in Matthew Stafford, so feel free to go beyond $3 and just take the overage out of your bids on the second QB for your team.

Stafford has an MVP-worthy season and pulls a Matt Ryan circa whatever years it was when Matt Ryan was the top fantasy QB.

I honestly can’t see him falling past QB12. Not what you’d hope but not enough for you to blame me. That’s all that really counts for any of us at the end of the season, isn’t it?