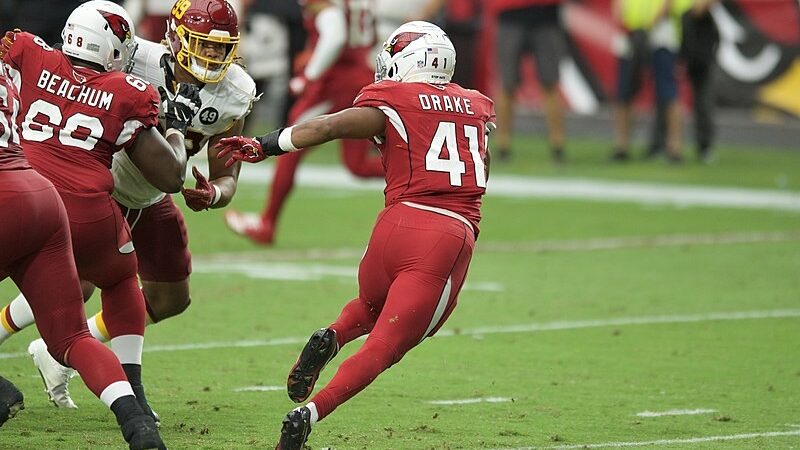 As we gear up to the start of the NFL season, Football Absurdity is going to bring you a comprehensive breakdown of every notable player that will be available in fantasy football drafts. The Raiders signing Kenyan Drake was a shock to both the football community and his fantasy value. But I’m rostering him on a lot of my teams. Plus, you can get Drake plus 10 other running backs for only $1*! An unbelievable deal with no strings attached!

*by signing up for our Kenyan Drake promotion, you agree to buy 5 additional waiver wire running backs each month for a billing fee of $59.99 plus shipping.

In the 15 games he played in 2020, the Raiders gave Josh Jacobs an impressive 63% of the carries. For comparison, Derrick Henry got 71% of his team’s carries, which is not much higher. I’m just assuming Henry led the league in % of their team’s total carries: Even if he didn’t he represents a “guy who I think of when I think about a guy who gets a lot of the carry share.” But the signing of Drake has me suspicious. That’s why I’m offering you the exclusive offer to join my V.I.P. running backs club. If for any reason, your running back gets injured, you can use our easy return system* to receive his backup.

*I will place your call on hold until you hang up. Also, I live in India.

So, the argument would seem to be pointing that the Raiders will continue to use Jacobs, leaving paltry shares for Drake. However, Drake is a way better pass catcher than Jacobs: Although Drake caught only 25 balls in 2020, past years make that look like an anomaly. So he could have bye week value or even be a remotely good starter in PPR leagues. What’s definitely good is joining my sales force and making money from home selling my running back protection plan to people. Even though you have to get everything from me at a price I get to dictate and can’t use any of my leads or resources, you get to be your own boss!

Kenyan Drake Auction Value: $2
Draft Ranking: Find out for your league settings in a Beersheet!

Drake has shown he can be a three-down back, even though he doesn’t have a lot of talent. So if Jacobs goes down, he might step up. If you’re the type of person to like handcuffs, sure then handcuff Jacobs like you’re in a Las Vegas Tunnel. Right now he’s going in the 8th round. That’s a little high for me when players like Trey Sermon, Brandin Cooks, and Gus Edwards are still on the board.

Personally, I don’t handcuff players but I do draft handcuffs. Especially ones that catch passes and therefore have bye-week replacement value in PPR leagues. I use Toolbox Bench strategy, where most of my bench is high-upside players that aren’t great in the early season. Drake fits that, so I’ve been bidding $2 or $3 for him at auctions. Any more than that, though, I’d be allocating funds that could better be used to get improved starters. Also, I work for the IRS and you have a huge penalty. To avoid jail time, call me and I’ll let you pay the U.S. Government using iTunes gift cards.

Turns out Josh Jacobs injuries are lingering and Gruden got Drake to ease the load. You have an immediate flex start who becomes a great RB as Jacobs wears down. You take advantage of my oofer to let me wire the summ of $1.4 million to you to halp the Prince of Ottoman get the funds out of his inhairitance .

Josh Jacobs is again the go-to rusher. The Raiders decide not to work Drake into the passing game a lot and he ends up on your waiver wire. Your computer is full of evil viruses but you do not give me your credit card number in order to perform a Magick ritual.