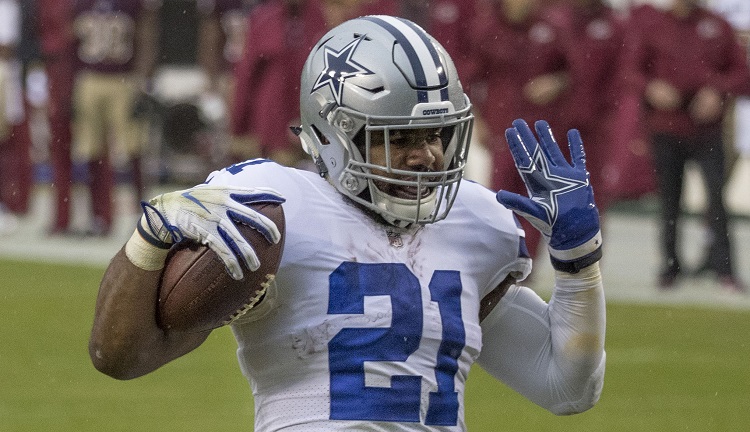 As we gear up to the start of the NFL season, Football Absurdity is going to bring you a comprehensive breakdown of every notable player that will be available in fantasy football drafts. Elliott looked good before Dak Prescott spiraled his leg around like a Twizzler. But Zeke has averaged 330.8 touches per season in his 5 seasons. This makes him the oldest 25-year-old in the history of humans. He is a time paradox. This fulfills the ancient prophecy, which means the world will soon end.

Or maybe the World won’t end, Elliott just has a lot of carries for his age. I don’t know: I guess I’m in an overdramatic mood today. It’s hard not to, with how polarizing Elliott is. On the one hand: Skilled, bell cow back on the Greatest Offense in Football History. Their offensive line is healed up, and apparently, the finest tailors in all the land were able to sew Dak’s leg back on him. This normally would propel a back to #1 overall average draft position. Well, #2, actually, because CMC is the second coming of LT. He is risen!

Oooooooon the other hand… Elliott’s scoring shrunk to nearly half of what it was before Dak’s injury. Who can be really sure if the horrifying, life-traumatizing visage of his leg injury is something that can be undone? I don’t know, maybe with a lot of psychotherapy, I can move beyond it. Also, quarterbacks don’t traditionally have bounce-back years after similar injuries. They often don’t have playing time the next season, even. Luckily we aren’t talking about Dak, here, we are talking about Zeke.

Auction Value: $49
Draft Ranking: Find out for your league settings in a Beersheet!

I’m personally going to sit this one out unless Zeke falls to me. That means at the end of the first round or under $50. Looking over my all-human mock auctions, that seems to happen in about 10% of them. If you are a believer, that’s fine, but don’t reach for him over just-as-talented players who have way less wear and tear. That means CMC, Kamara, Henry, Cook, Barkley. I say Taylor is ahead of Zeke, too, but there’s pushback about that and it TEARS ME UP INSIDE!

Zeke returns a top-5, every-week output after he falls to the mid-late first or low $50s. Everyone throws me a giant parade for being the world’s wrongest man, pelting me with jeers and tomatoes.

Career workload and failing team health drop Zeke down to RB2 status. Nobody comments about how right I was and I cry myself to sleep.