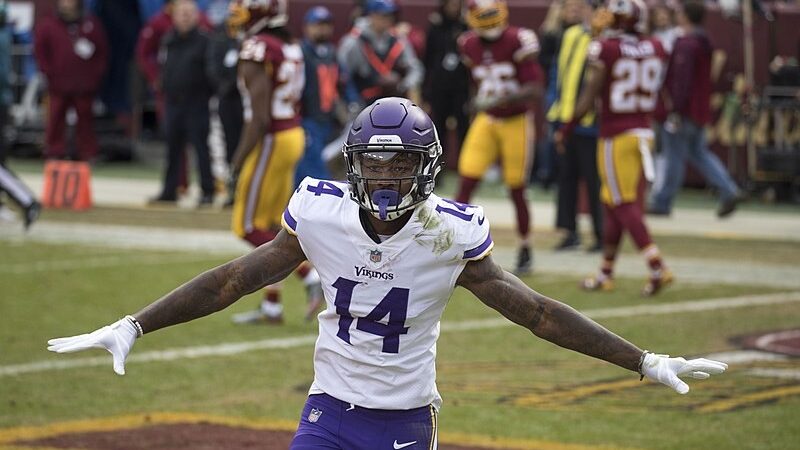 As we gear up to the start of the NFL season, Football Absurdity is going to bring you a comprehensive breakdown of every notable player that will be available in fantasy football drafts. Stefon Diggs earned us the right to give everyone a hearty “told you so” when he blew up in Buffalo. Can he repeat his career year on an offense that is virtually unchanged? Also, how come they’ve never syndicated the classic 1990s sitcom Totally Buggin’?

We didn’t have to watch that much tape to realize that Allen-Diggs was going to be something special in 2020. The even cadence of Josh Allen’s bounce in the pocket, even under pressure, told us he had what it takes to go to the next level. That brought Diggs to the next level, too, leaping from WR21 in 2019 to WR3 last year. Just like TV patriarch John Totally lept to the next level when his quirky family moved from a deep south farmstead to a Brooklyn apartment. They were Totally Buggin’! I’m glad they toned down the overt racism in the pilot episode.

So now the question is: Was that a high watermark that will come down like Lake Mead? To figure that out, we have to examine the pieces of the Fluffabo Bills’ offense. We will do it piece by piece, such as when Tyler Totally had to examine his use of certain terminology after he fell for the Chinese teen next door. He was Totally Buggin’!

First: Diggs. Diggs is still Diggs, we can move on. Next: Allen. Allen is entering his third year, a year when many quality quarterbacks make another leap. Unfortunately, it will be hard to make too much of a leap in fantasy, since he was the 2020 number one overall fantasy QB. So he won’t show as much growth as Bud Totally did when he used his cherished confederate flag to extinguish the burning cross little Sally had placed in the lobby. They were Totally Buggin’!

The Bills added some offensive line depth in free agency and the draft. Naturally, that makes Diggs a safer play, raising his floor. So where exactly should he be going in drafts?

Stefon Diggs Auction Value: $35
Draft Ranking: Find out for your league settings in a Beersheet!

Drafting a WR at the back of the first round means that no top-tier RBs have fallen. This is a year that has more top-tier RBs than any year I can remember in my decades-long fantasy career. So if that’s where you’re picking, feel free to grab him if all the top backs are gone. You can pair him with a solid tier-2 RB like Aaron Jones or Austin Ekeler. I’m not really here to tell you what RBs to place in what tiers. That’s for you to decide for yourself or use a Beersheet. I think Totally Buggin’! really jumped the shark when they did a Saved by the Bell crossover episode and Zack Morris tried to replace the apartment complex sanitation staff with illegal immigrants. He was Totally Buggin’!

At auction, I list him for $35, which is pretty much industry low. Whaaaaa? Does that mean I’m industry-low on him? Not at all, I’m still saying he’s a decent enough first-round draft pick. Remember? You just read that. But my extremely thoroughly tested auction strategy cannot spend more than $35 and consistently (meaning every time) end up with an awesome team.

If you like having a spectacular WR1, feel free to ditch my awesome strategy. In my mostly-human mocks, he sometimes goes for low $40s, that’s where I’d say you should aim to drop out if you really twist my arm. Don’t go high $50s as I’ve seen happen quite a few times, just as we’ve all seen the clip from the Fourth of July episode where Beau Totally tosses a lit m80 into a local bodega. He was Totally Buggin’! The canned audience laughter really did not age well.

You get Diggs for a reasonable price and again get top-three production. Totally Buggin’! gets syndicated, introducing a whole new generation to Snuggles, the pitbull who only gets along with a certain type of mailman. She’s Totally Buggin’!

You reach for Diggs with draft capital that could’ve been much better used for a top RB. Totally Buggin’! gets syndicated, but only episodes after season 4 where they introduced the Arabian neighbor who dresses like a Leprechaun and can grant wishes. He was only partially Buggin’!