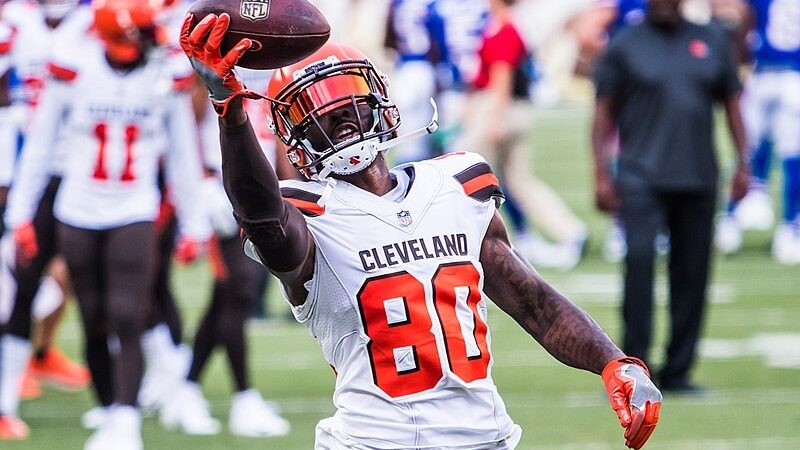 As we gear up to the start of the NFL season, Football Absurdity is going to bring you a comprehensive breakdown of every notable player that will be available in fantasy football drafts. Even with Odell Beckham, Jr. out, Jarvis Landry had all-time lows in receptions, targets, yards, and touchdowns. But if you can just forget about that overwhelming mountain of evidence to the contrary, there’s a lot to get excited about! Let’s arbitrarily focus on good things about Jarvis Landry! Yay!

Jarvis Landry is soooo cool, y’all! Sure, he finished the year as WR37 in total fantasy points despite starting 15 games. But did you ever stop to consider he used to be not bad for fantasy? Just four short years ago, he had 112 receptions! Forget about the fact that Cleveland coach Kevin Stefanski leans on the run rather than short-yardage targets. Just forget about it, okay? Kevin who? Jarvis Landry has a cat named Charlie who can play the Ukelele*! That’s the kinda guy you need on your fantasy squad.

*I’m assuming all this. Landry just looks like the kind of guy who has a cat named Charlie that is surprisingly adept at smaller stringed instruments.

Overall, sure it looks bleak: OBJ looks to return, which should take even more targets away from Landry. There aren’t a lot of targets to go around on a Browns’ offense that was bottom-5 in the league in terms of total pass attempts in 2020. BUT he had 6 touchdowns in his last 7 games (including playoffs). So shove that in your pipe and clog it, stat nerds!

Jarvis Landry Auction Value: $1
Draft Ranking: Find out for your league settings in a Beersheet!

Landry has fantasy value. But only as a bye week flex. There’s literally zero reason to reach for Landry: His past fantasy sparkle was volume, which is something the Browns are built to not do. His round 9-11 ADP is right where he should be going. Get him as that boring low-upside player you use to get your team through the byes. Errr, I mean… He’s soooo reliable! You should roster him in all formats! Get excited about his boring ceiling! The Browns score enough that he could have a decent week that propels your team over the finish line, which is why he’s not going in rounds 12-13.

At an  auction, get him for $1. I guess if it’s late and you’re using Toolbox Bench strategy, $2 makes sense if he’s your only high-floor bench WR. Most of the time I see him going for $1. I once saw him go for $4 and once for $7. Those team owners are going to end up very sad, and that’s something to GET EXCITED about.

*Again, this is an assumption.

You spend anything but the minimum amount of draft capital on him and are forced to start him as your WR2, thus creating a weekly points impairment for your team. You spiral into a deep depression and eventually enter a catatonic state. Fun!