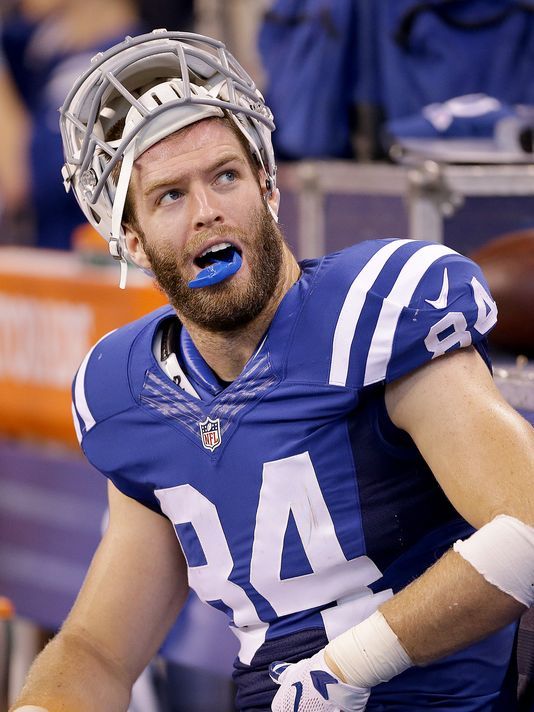 This week my co-worker, Jeff Krisko, is singing the praises of Benjamin Watson.  This may be the first and last time this year that anyone cares about Benjamin Watson.  We all know that Jeff is a very smart, funny, good-looking and well-endowed specimen of a man.  I find it difficult to look into his dazzling eyes and argue with him.  But you would have to be a literal crazy person if you don’t start Jack Doyle.

In week one, I told you to start Jesse James.  Why?  Because he was playing the Cleveland Browns.  Did you listen?  If you did listen, you would have been the benefactor of the best tight end performance in week one in points per reception scoring leagues.  Jesse James had 6 catches for 41 yards receiving and 2 touchdowns.

In week two, I told you to start Benjamin Watson. Why?  Because, like Jesse James the week before him, he was playing the Cleveland Browns.  Did you listen to me then?  If you weren’t paying attention before, how can I expect you to pay attention now.  I hope you took notice of the 4th best score in points per reception scoring leagues.  Last week, Ben Watson had 8 catches for 91 yards.

So if you don’t want to listen to me, go ahead and start Benjamin Watson.  But I can’t be held responsible for the results.  If you want to stream tight ends like a champion, then let me tell you why you should start Jack Doyle.

Do I mean former British Army Boxing Champion, Jack “The Gorgeous Gael” Doyle. What are you, crazy?  The man has been dead almost 40 years.  No, I am saying you should start Jack Doyle, the starting tight end for the Indianapolis Colts.

I could dazzle you with fancy stats about why Jack Doyle is good, but it doesn’t matter.  I don’t think Jesse James is very good.  And frankly, Ben Watson leaves a lot to be desired at the tight end spot, if you know what I mean.  Do you know who I think is good?  ANY TIGHT END THAT IS PLAYING THE CLEVELAND BROWNS!

I don’t know how many times I have to tell you this.  The Cleveland Browns are just awful at defending the tight end position.  They have given up the most points to the position last year AND this year.  Like most fantasy football players, they don’t consider tight ends people.  Which is probably why they forget to defend them.   They are giving up almost four more points per game in standard scoring leagues then the next worst defense, the New Orleans Saints. And the Saint are really bad at defense!

One Comment on “Fantasy Football Absurdity Check: Why You Should Start Jack Doyle Over Benjamin Watson in Week Three”