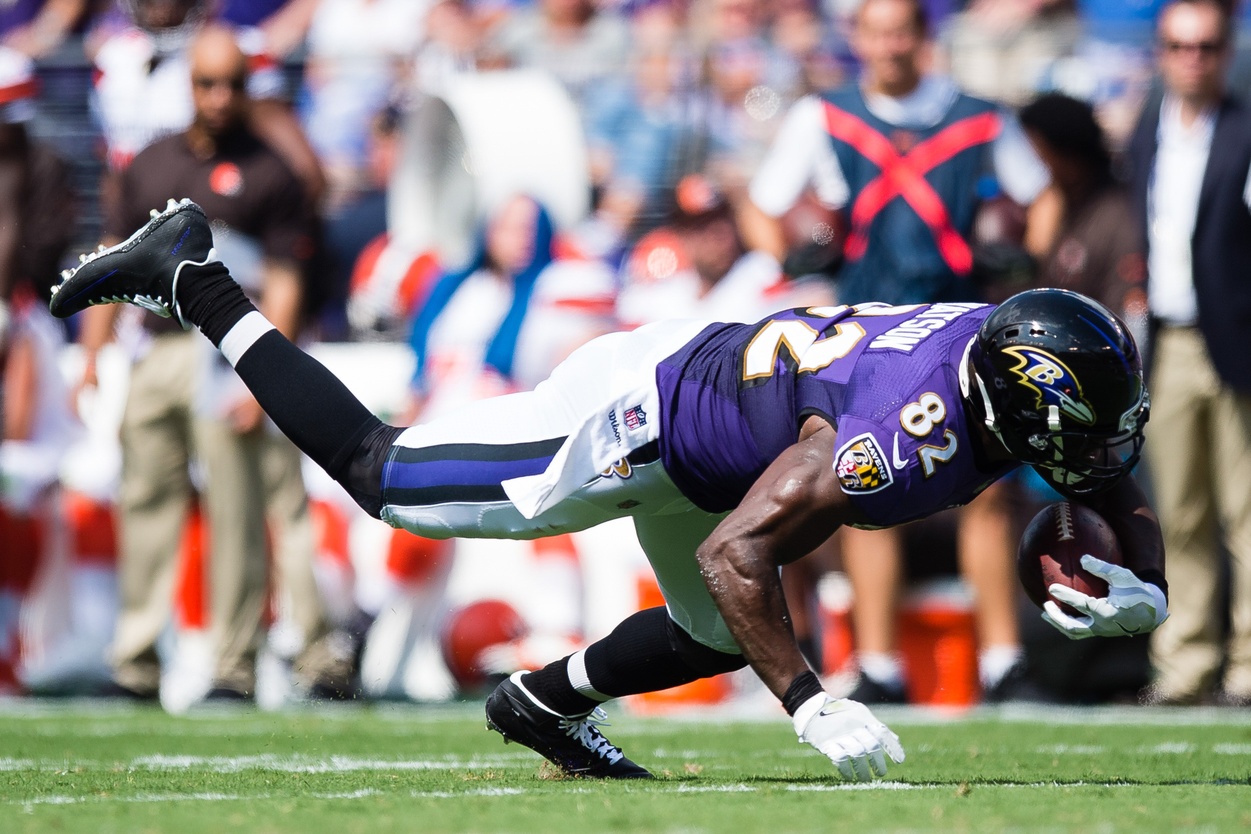 The Baltimore Ravens had one of the most prolific PPR fantasy football commodities last season in Dennis Pitta. Pitta continued his sad career of high highs and low lows brought on by devastating hip injuries. Before Pitta returned to prominence, the Ravens plucked Benjamin Watson from the Saints in what feels like his tenth career act. Dennis Pitta soaked up all the production last season. Danny The Ravens then planned for Danny Woodhead to soak up Pitta’s targets. That means the Ravens meant for Watson to not do much this year. There wasn’t supposed to be anything left for Watson, but then the 2017 Ravens happened. Joe Flacco gave Watson eight targets after not getting him in on the action week one. Watson responded by hauling in every target and totaling 91 yards.

Going forward, Watson’s production will be more week two than week one, as the Ravens destroyed the Bengals and Joe Flacco threw the ball just seventeen times in the victory. That and the Danny Woodhead injury give us very little to take from week one, but a lot to get from week two. Watson’s week two tape shows that his targets weren’t flukey dump-offs or emergency release valve plays from Flacco. The Ravens clearly designed plays to get Benjamin Watson the football in week two.

The Ravens ran the same pitch-and-catch combination with Watson and Flacco on three plays and did so to great success. The other receivers cleared out as Flacco rolled to his right and Watson ran a drag route after lining up just left of the Left Tackle. This play was successful all three times it was called for Watson and seemed to be go-to for the Ravens. Watson also had a skinny post that went for a large gain and was Flacco’s first target on another route.

Ben Watson’s usage week one gives us something fantasy football tight end streamers seek: target volume with good yardage. You want seven fantasy points as a baseline for your streaming tight ends, so you’re usually looking for someone who will get you a touchdown, and you hope for yardage. With Watson, he will get the yardage, and you can pray for the touchdown cherry on top. In PPR leagues, he’s a no-brainer starter going forward.

This week, the Ravens take on the Jacksonville Jaguars. The Jags are a Jekyll & Hyde unit so far this year. The Jaguars rank fourth in fantasy points per game, but their 27 points through two weeks come on the heels of 28 points week one. While the Jags’ D/ST isn’t in question here, neither is their ability to yield points to opposing tight ends. They’ve given up the third-most points to the position this year, including two touchdowns to tight ends last week against Tennessee. They can, and will, cede production to tight ends. That makes Benjamin Watson a perfect streaming candidate this week for Tyler Eifert or Jimmy Graham owners. Fire him up. He should already be on your roster, since Waleed told you to start him last week.