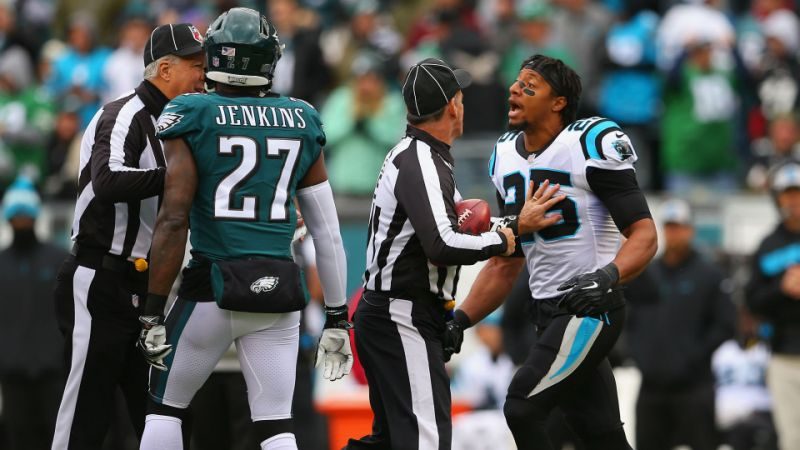 Yes, those “funny” NFL comments by “funny” people, that’s what I’m about. I wanted to produce weirdo comments from both sides of the political spectrum here, but I must admit I was a bit nervous. After all, conservatives have sworn off the NFL because of conflating players kneeling to bring attention to cops killing unarmed black people with players kneeling because they totally hate veterans and American freedoms. In fact, I’d be shocked if the Fox News coverage of this article even has more than a few comments and furthermore this debate between Reid and Jenkins over how the kneeling should best be handled is a fair fight where both sides have some good points and-

Oh, cool then. ON WITH THE SHOW!

I mean, there are Asians in the NFL, there are African Americans with brains, but what infuriates me the most irrationally is that the existence of Asians in the NFL has no bearing on one’s ability to “invent” anything. You think Doctor Frankenstein was all “I could reanimate a jigsaw puzzle of dead organs, if only there were women in the Swiss National Guard!” No, he just did it, stop using unrelated platitudes as excuses for not advancing science, or whatever this poster thinks they are doing.

So, if he wasn’t watching the NFL before the protests started, how can he not realize that he’s done absolutely nothing for his cause but bitch and- why do I expect introspection from hollow people? I set myself up for failure so much trying to explain these funny comments.

All this garbage makes me appreciate this funny commenter all the more. They don’t worry about being relevant to the article or making any kind of rational argument. They know they’re posting on Fox News and they fully embrace it:

You do you, funny comments guy “glitchman,” even if “doing you” means “walking into totally unrelated articles in an echo chamber website and declaring your enemies have committed crimes of an undisclosed nature.” Seriously, at least you straightforward, unlike this commenter:

Why doesn’t this person know how to spell “Jaguars?” It’s not even one of those silly misspellings stupid people use like “Owe-bama” or “George W Smush” or “Ronald I will screw Americans who are mentally ill R’again and R’again?”

Still that poster shows more sense than this person:

i don’t have any comment on this. This person obviously loves LeBron as they call him LeBrain. I don’t even. Moving on, let’s examine the scary realm people enter when they are presented with facts that go against their ridiculous opinions:

Yes, let’s just make stuff up. Or, we could also have a meltdown:

And, just to show I don’t think making up weird nonsense is restricted to conservatives, here’s a final comment from Fox News’ coverage of the Reid-Jenkins fight:

“I know many black pros that… ask not to be indentified [sic]” is some serious levels of “I just make shit up to win an argument.” It’s even more impactful because it hijacked a pretty reasonable and respectful discussion between proponents of each side.

Let’s check out the left-wing side of idiocy on this issue.

This is like, “arrested for touching oneself at a bus stop” level of lacking awareness of one’s surroundings.

Anyway, I gotta go take a long drink break, because I just wandered for hours through the funny comments sections of sites where people have really, really strong and bad opinions of racial justice.

For more funny comments, check out these previous Hot Takes from Crazy People:

Funny Comments from Crazy People – We’ll by Any Chance R U Available Person?