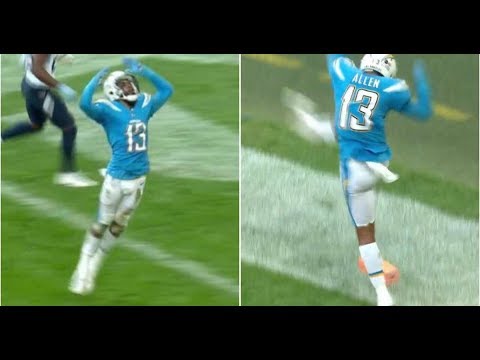 Week seven is behind us and some of you are starting to appreciate that this is a passing league. Yet you keep passing on all the waiver wire value at wide receiver. Some of you thought Adam Theilen could not keep accruing 100-yard games. And you were wrong. Some of you thought Keenan Allen wouldn’t have a temper tantrum in a football game he was winning. And you were wrong. Some of you thought fantasy football could be fun. And oh boy were you wrong. Lucky for you, there are waiver wire wide receiver options available to save you from yourself. If I don’t mention someone whom you think I should be talking about, just know there are many reasons why I overlooked them. Maybe they are owned in most leagues. Maybe they are so bad I don’t even consider them. Maybe it’s because your opinions cannot be trusted. After all, you are here. So let us examine what our best week 8 waiver wire WRs are.

Tyrell Williams – Owned in 12% of leagues –Tyrell Williams has had 7 catches for 236 yards and 3 touchdowns over the past two weeks.  There is no denying that he has been producing.  The problem is he is not getting the targets to make those numbers sustainable.  On top of that, Williams has a bye-week in week eight.  All that adds up to is a hard pass for Ty among week 8 waiver wire WRs.

Courtland Sutton – Owned in 5% of leagues – Sutton hasn’t really done much to put him on the waiver wire watch list.  However, rumors are bounding that Demaryius Thomas is on the trade block in Denver.  If Thomas does get traded, then Sutton’s stock goes up real fast.  I’m not advocating picking up Sutton, but you definitely want to keep an eye on that situation in Denver and be ready to act if anything changes with that receiving corp.

Christian Kirk – Owned in 22% of leagues – Christian Kirk has been quietly producing low-end WR2 numbers over the last few weeks.  While he hasn’t been exciting, he might be worth getting excited about.  With Mike McCoy fired in Arizona, the Cardinals offense can only improve.  And Christian Kirk looks to be the receiver who could benefit the most from this coaching change.  If you need a deep sleeper with upside down the stretch, Christian Kirk could be that guy.

ABSURDITY CHECK AKA If I’ve Said It Once…..

Chris Godwin – Owned in 48% of leagues – In week seven, Chris Godwin had 5 catches for 59 yards.  I’m getting pretty sick of pointing out that he is available, but this is a hill that I am willing to die on.  Pick up Chris Godwin in your fantasy leagues.  He real good at football.

Chester Rogers — Owned in 29% of leagues  (If for some reason, you find yourself wanting an Indianapolis receiver who is getting the looks, but not the production.)

Donte Moncrief — Owned in 12% of leagues (If for some reason, you find yourself wanting shares of the Jacksonville Jaguars passing game because you clearly hate yourself.)

Danny Amendola — Owned in 17% of leagues (If for some reason, you find yourself wanting wide receivers who are made of glass.)