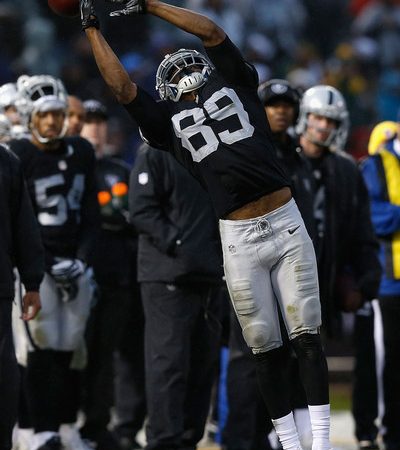 If you are not worried about dropped passes, then this fantasy football Amari Cooper player profile is for you. As we gear up to the start of the NFL season, Football Absurdity is going to bring you a comprehensive breakdown of every notable player that will be available in fantasy football drafts.  When you don’t see us talking about Christine Michael or Mike Davis, don’t get mad at us for neglecting your favorite sleeper.  Get mad at yourself for having bad taste in football players.  We are only focusing on the top-rated running backs in standard scoring and points per game leagues.

Overview: Legend tells of Amari Cooper.  As a young traveler, over the arid twilight of the Arabian desert, he stumbled upon a magic lamp that would grant him three wishes.  None know of his first two wishes, but we do know of the third.  Seeking to be a warrior of renown, he did beseech the genie of the lamp to make his body appear to be carved of living onyx, that no man could stand against him.  Little did he know that when he began his career of playing wide receiver in the NFL, that wishing for stone hands is probably a bad idea.

Truth be told, the stories of Amari Cooper’s terrible hands feel slightly overblown to me.  There is no doubt that he had a terrible 2017 season by any metric.  My problem is his catch rate the previous two years is not unreasonable to expect from a top-flight receiver.  In 2016, he caught 62.9% of his passes with a healthy Derek Carr.  How much of his regression in 2017 can be attributed to the turmoil the Oakland Raiders faced both on and off the field?

Strategy: Amari Cooper is currently being drafted late-third/early-fourth round, which sounds about right.  All the players in that area have questions marks.  Larry Fitzgerald has a new system and concerns about age.  Derrick Henry has to contend with Dion Lewis for carries.  Josh Gordon is Josh Gordon.  But Amari Cooper was a top-five NFL draft pick, so he is going to get every opportunity to succeed and is the clear number one in Oakland’s offense.

Ceiling:  If the Raiders have a bounce-back year, Cooper can find himself solidly in the WR2 range.  He could even go as high as a low-end WR1, but I think that might be asking a lot.

Floor:   What will actually happen is two games into the season, the curse of the genie will be revealed.  Amari Cooper will start moving slower and slower on the football field until one day, he moves no more.  As the Oakland Raiders move to Las Vegas, a crumbling Coliseum left behind, the stands empty, there will be a lone statue on the field.  Running an out-route, hands outstretched, waiting for a ball that never comes.  There stands Amari Cooper.  Also, your fantasy football team will lose every game because you drafted him.

For more 2018 fantasy football player profiles, check out these links: