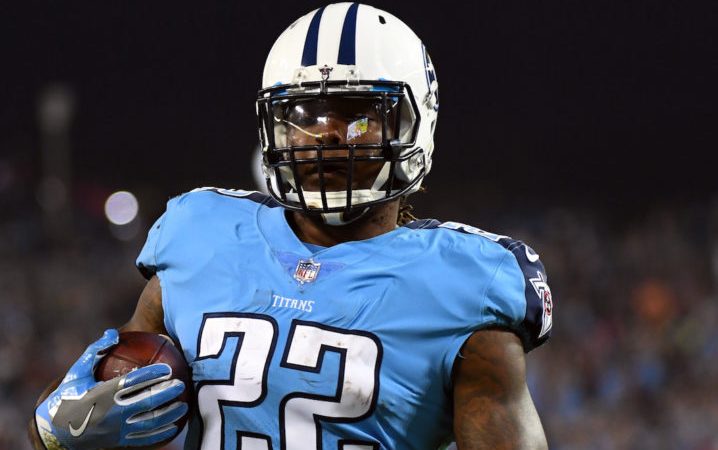 If you are wondering whether your running back is in a timeshare, then this fantasy football Derrick Henry player profile is for you. As we gear up to the start of the NFL season, Football Absurdity is going to bring you a comprehensive breakdown of every notable player that will be available in fantasy football drafts.  When you don’t see us talking about Christine Michael or Mike Davis, don’t get mad at us for neglecting your favorite sleeper.  Get mad at yourself for having bad taste in football players. We are only focusing on the top-rated running backs in standard scoring and points per game leagues.

Overview: Derrick Henry both frightens and excites me.  If you watch him play, he looks like he should be dominating on every play.  He is a big, bad freight train of a man.  But his usage is really concerning.  It doesn’t appear as if the Titans trust him with the football.  I was willing to attribute this to having DeMarco Murray be their number one back.  At least, until Tennessee signed Dion Lewis to a 4 year / $19.8 million contract.  That is a lot of money to give someone if you believe you have your number one back on your roster.  I think Derrick Henry could have a great year, but there are a lot of red flags that make me want to proceed with caution.

Strategy: How I proceed with this draft will really depend on how my team looks.  If Henry falls to the late third/early fourth, like his current ADP suggests, that means that I will possibly have a chance at Stefon Diggs, T.Y. Hilton or Doug Baldwin.  All three have similar ceilings as Henry, but much higher floors.  If I have loaded up on wide receivers in the previous rounds, this becomes a trickier decision.  He certainly has the upside to be an RB1 and I definitely like his ceiling more than other similarly ranked backs, such as Derrius Guice or Rashaad Penny.  Simply put, I much prefer a wide receiver where his current ADP suggests, but if I’ve already drafted a couple, I would grudgingly look him up at this price.

Ceiling: Derrick Henry has the ability to end the year as an RB1.  If Tennessee gets him the ball.

Floor:  What will actually happen is Dion Lewis will end the year as an RB1, because Tennessee doesn’t give Derrick Henry the ball.  Instead, Henry continues to be a change-of-pace back that constantly disappoints in fantasy football.