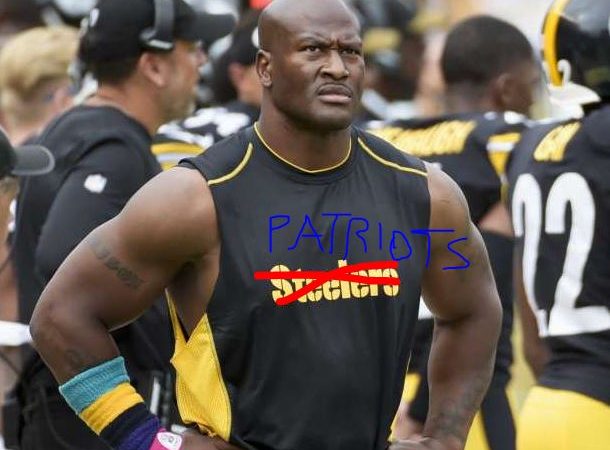 This week, the Pittsburgh Steelers shocked the football world when they cut veteran linebacker James Harrison.  Some of us more refined NFL fans understand that what has come to pass is destiny.  Let’s not kid ourselves and pretend that James Harrison does not belong on the New England Patriots.  He has always been destined to be a Belichick disciple, because he understands the Patriot Way.

I, like many true fans of the sport, have spent long hours studying what The Patriot Way means.  Because as we all know, the Patriots are the greatest organization that ever was, is or will be.  If you want to think like a champion, you have to understand how a champion thinks.

The Patriot Way means a champion does his job.  I don’t care if your scrubbing out all the toilets at Gillette Stadium or helping Bob Kraft land his dream acting role, you do it like a champion and win that Oscar!  James Harrison does his job at 16500%.  Just look at how he works out.

I don’t care what that Dupree guy says about only Harrison being allowed to work out like that in Pittsburgh!  If you are serious about being a champion, you work out like a champion and f*ck that pansy trainer.  Maybe Dupree is okay with doing Pilates when he’s told, but Patriots lift weights!

And Patriots show up on time.  You don’t come to your job late and expect to still have a job.  Go move to California if you expect some hippie doo-dah bullsh*t.  Not here in Boston!  We come to work hard.  You can’t just show up to your meetings and take a nap.

You’re here to carefully dissect opposing teams by some of the finest minds in the universe. So be grateful for the opportunity. Kevin Faulk has broken multiple traffic laws just to make sure he was never late.  That is how important the word of Belichick is.  I have no doubts that James Harrison will be on time.

But most important of all, the Patriot Way is about character!  It’s not just about doing it, it’s about doing it right.  The team comes first.  And everyone knows James Harrison to be a man of impeccable character.  He knows how to treat people right.  Just like a true Patriot. And unlike all those other garbage people.

For Maurkice Pouncey to sit there and act like James Harrison has erased his own legacy shows that he doesn’t understand football.  The only legacy that matters is being a Patriot.  Nobody cares about other football teams, unless they are playing the Patriots.  As far as I can tell, James Harrison has secured his legacy by embracing the Patriot Way!

View all posts by Bom Trady →