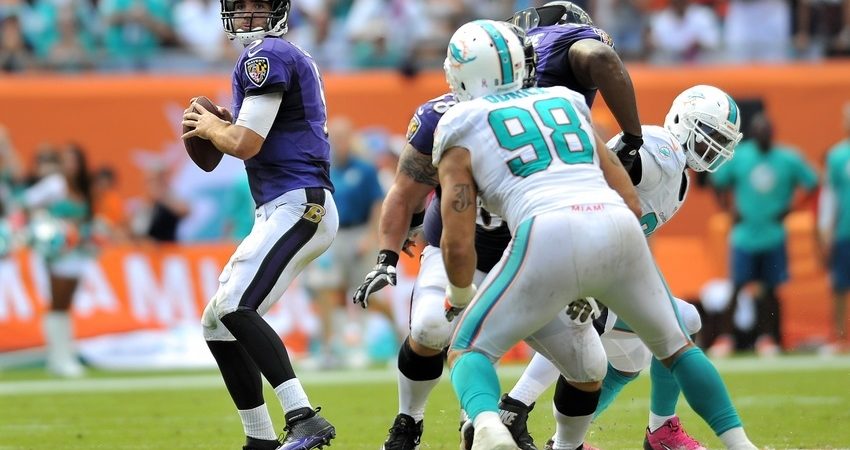 An extremely condescending and sarcastic look at the biggest Week 8 NFL Surprises.

Great job to the Cleveland Browns for briefly convincing the nation of England that American football games have a chance of not being a boring blowout. Cleveland actually held a brief lead in this game, something they have not done much of all year. Unfortunately, the real Cleveland showed up in the second half with all the mistakes and mental errors for which they are known. Still, for two quarters, the Browns of Cleveland managed to give real hope to a city whose sports fans have all but checked out for decades. Seriously, look at this lazy logo for the Cavs from the 1990s:

Seriously, if your sports teams are so bad that you need to make a logo to remind them of the basic objective of the game, you’re going to have some despondent fans. So, thank you Cleveland Browns, for giving these fans a few minutes of reprieve and hope (before falling flat on your face, as always).

In this madcap world full of wacky political hijinks and worldwide soul-crushing despair, it’s nice to have something to hold on to that makes sense. Miami had even added to the chaos, going into their TNF game full of Week 8 NFL surprises, by coming from behind for two straight wins. But Thursday, the team that gave up before the season even started (as evidenced by signing Jay Cutler) actually played like a team that truly did not want to be on the football field. I usually have to chug about 8 shots and 6 beers to make it through the slog that is Thursday Night Football, but because of Miami’s on-point showing, I managed to limit my drinking to the near-pious amount of half a box of red wine.

A game ball has to go to Seattle’s running game here, who came through with one of the biggest Week 8 NFL surprises. Their three backs gained totals of 6 yards, -1 yards, and -2 yards Sunday and convinced Russell Wilson to actually go out and win a shootout on his own. Had they not been so utterly incompetent, Wilson would have done what he has done 11 or the previous 12 times Seattle has allowed 30+ points, and lose. Luckily, the run game was so bad that Wilson the Robot put the entire game on his back and moved the ball nearly 500 yards. Letting their offensive line wither to a dry husk was the smartest thing Seattle’s general management ever did!

For more articles that are TRULY AMAZING and NOT AT ALL SARCASTIC, click these links:

This Week in Fantasy Football Left Me Feeling Sexually Unsatisfied