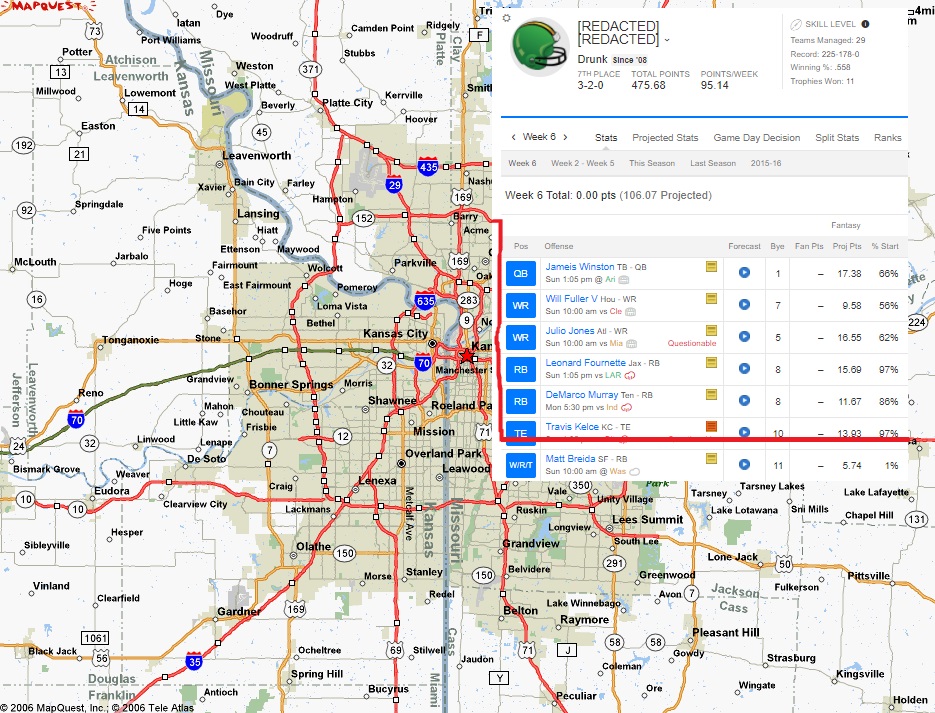 Greetings humans and extra-terrestrial aficionados of human fantasy sports. I am here with a Week 6 report for NFL injuries that will bring the curtains down on this whole plot. It’s big, man, GLOBAL!

Travis Kelce was put into the “concussion” protocol this week after allegedly suffering from a “concussion.” However, the Chiefs had their annual fashion show last night, and guess who was in attendance but not on the runway? Hmmm, one side says he’s in the concussion protocol but the other side says he is unable to walk in a straight line, turn around, then walk back? I think there’s definitely something deeper going on here. Take a look at this map of Kansas City, Missouri:

Now take a look at my fantasy lineup this week:

Notice what happens when we overlay the two images. NOTE: I had to do this in MSpaint, as Adobe would not accept silver ore as payment for Photoshop.

I was suspicious when the New York Jets started winning, as anyone with a brain knew that there was a conspiracy to go 0-16 by the Jets owners and several New York area waste disposal companies. So when Powell came down with a strained calf and missed practice, I decided to dig deeper.

The key was when I noted that Bilal was a ridiculous name that no one would actually have. Fans of The Da Vinci Code and/or dyslexia know that this is a key sign that an anagram is at hand. Rearranging the letters in

I’ve always been suspicious of pillow labels. I mean look at this:

Under penalty of law? This runs all the way up to the U.S. Government! As fans of my weekly CB radio broadcast know, the U.S. government has long been gang-stalking my fantasy football team in order to drive me insane to discredit me when I speak THE TRUTH. And wouldn’tcha know: Bilal Powell is in my opponents’ lineup this week!

Shame on you, U.S. Government, stop tanking my team.

Parker showed up on the Week 6 report for NFL injuries after an ankle tweak took him out of Sunday’s game. It was said to be a minor issue, yet Parker missed practice on Wednesday. Very suspicious…

Think about it, what’s the one thing you can’t do with a hurt ankle? Kneel for the national anthem, that’s right. You might think one player missing one kneeldown is meaningless, but not for me. You see, for weeks the players have been kneeling in a particular pattern to communicate to me the exact proportions needed to make the best reuben sandwich of all time. I’m finally down to the dressing, and one missing Parker knee could mean the difference between the best Thousand Island and something with way less fat.

Mariota’s injury is not the real issue, here. The real issue is something so complex, so insidious, that when I reveal it everyone will say, “Oh, [FIRST NAME REDACTED], that totally makes perfect sense.”

First of all, consider the rotation of the Earth. It goes from West to East and revolves around the sun every 365.2422 days. Yet we have divided this up into seven day weeks, despite the fact that 365 is not evenly divisible by seven. Who did that? The Romans.

So, because of this, football is on 1 of the 7 days in a week: Sunday. But consider this: In 1970, Commissioner Pete Rozelle hatched a scheme to put football on 2 of the 7 days of the week. The new football day was Monday.

What does this mean for fantasy? Fast forward 47 years to today. The Tennessee Titans go into a mid-season matchup with their star quarterback on the week 6 report for NFL injuries. And what day does their game fall upon?

Since Marcus Mariota, who has a name with an anagram that will blow the lid off of the medical industry (“orca arm autism”), will be questionable up until game time, owners will need to seek a replacement or risk a late scratch on their most important position.

That’s the Week 6 report for NFL injuries. Keep watching the skies, because the ground is where the government beams the subliminal messages.