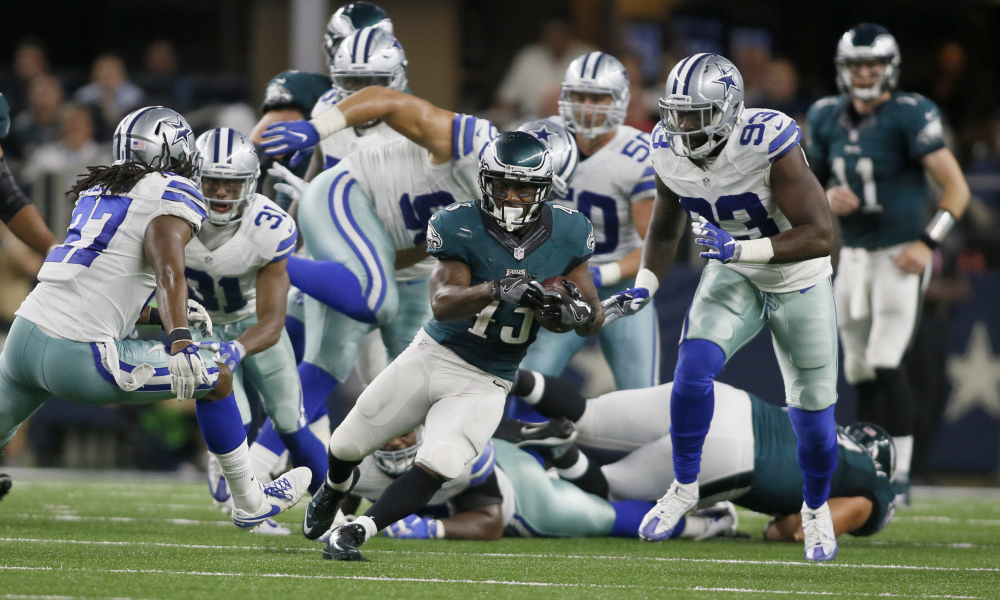 Dealing with an injury, Gordon sat out Wednesday’s practice. His starting-or-sitting decision will come down to whether he can practice or not for the rest of the week. However, I saw him kneel during the national anthem. Now, I have nothing against his right to disrespect our armed forces, it’s just that such an action is hard on the knee. Could Gordon exacerbate his injury, should he choose to kneel this Sunday? Surely. So, until he stops taking a knee, I can’t in good faith start him in any of my leagues.

Sproles is out for the rest of the season, and (since he said 2017 would be his last year) most likely he is done for his career. Ample debate has developed over whether LeGarrette Blount or Wendell Smallwood is the best back to own. However, Blount is old and he punched that Boise State player like a thug. And Smallwood just doesn’t seem like he has the football I.Q. to develop into an every-down back. Take a look at Tommy Taggart:

The former fullback for the Pittsburgh Power arena football league, which folded in 2014, Taggart is a real scrappy gym rat that makes me think he’ll be a real spark plug in the locker room. Even though he isn’t currently part of a team, and therefore doesn’t have a locker room, I still think he has some sort of… je ne sais quoi that will make him a great leader.

Benjamin’s knee shows no major structural damage, but he’ll still have to undergo treatment in order to be ready to play on Sunday. However, it’s not his knee that gives me the most concern. It’s his full, pouting lips. What if he’s trying to remember the play between the time the QB calls it and the time the ball is snapped 10 seconds later? What if his only way to remember it is to repeat the play over and over to himself? The other team will definitely be able to read his thick mouth, and will know when and how to blanket him. Not startable in any format.

Fortunately, Crabtree’s chest injury came back negative, so he’ll be back in Sunday’s game instead of sitting on his couch drawing disability checks to “pimp” his “phat” car. I’m just joking… it’s okay because I have a black friend.

Baldwin himself said his groin injury wasn’t serious, and that he fully expects to play against a woeful Colts secondary, this Sunday. I guess he’s one of the good ones. Did you know that there is a genetic mutation by people whose ancestors come from, um, certain continents? It makes the groin heal twice as fast and also grow twice as long.

About A Guy Who Is in Denial about His Own Racism