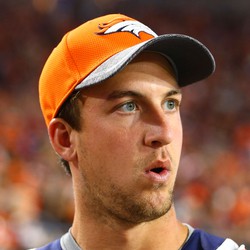 This week my co-worker, Jeff Krisko, suggested that starting Andy Dalton is the smart fantasy football play.  Personally, I would tread gingerly before starting him at quarterback.  There are some choices you can’t come back from.  If you need to grab a quarterback to play based on match ups, start Trevor Siemian.

First off, the Cincinnati Bengals are a dumpster-fire.  I take that back.  A dumpster-fire can actually serve a purpose, like keeping hobo’s warm during the winter.  To call the Cincinnati Bengals a dumpster-fire is an insult to the vagrant lives dumpster fires have saved.  They were so bad the first two weeks of the season, they had to sacrifice a coordinator at the alter of pseudo-accountability.  In comparison, The New York Jets, a team deliberately tanking their season, remains fully staffed and has a better record.

And leading the charge of this dumpster-fire is Andy Dalton.  On the year, the Red Rocket has had trouble getting off the ground, with a 2 to 1 interception to touchdown ratio.  That is not how that ratio is supposed to go.  In standard leagues, he has averaged 7.5 points per game.  If I wanted that type of production, I’d start him at tight end!

So if you want to run the risk of starting Andy Dalton during a day game, don’t be surprised when he bursts into flames on the field.  And while you watch your rust colored quarterback sink your fantasy team, you’ll realize all along that what you should have done was start Trevor Siemian on your team.

Trevor Siemian has everything you could want for from a quarterback.  He graduated from Northwestern, so you know he’s smart.  He has a pair of excellent receivers, which means he has plenty of opportunity to success.  And he has a soul, because he is not a redhead.

What I like even more is that in his first two games, Siemian was averaging over 3 touchdowns a game.  While he struggled against Buffalo, it is important to note that Buffalo has given up the 2nd fewest points to quarterbacks this season.  And this week, he is playing an Oakland Raiders defense that has given up the 4th most points to fantasy quarterbacks.

Now, I don’t know if it’s because I just watched Rise of Planet of the Apes, but this Siemian guy seems like someone that can get the job done.  If you want to run with a soulless quarterback whose team makes the New York Jets look good, then go ahead and start Andy Dalton.  But if you want to win with a gorilla mindset, then you should definitely start Trevor Siemian.

One Comment on “Fantasy Football Absurdity Check: Why You Should Start Trevor Siemian over Andy Dalton”