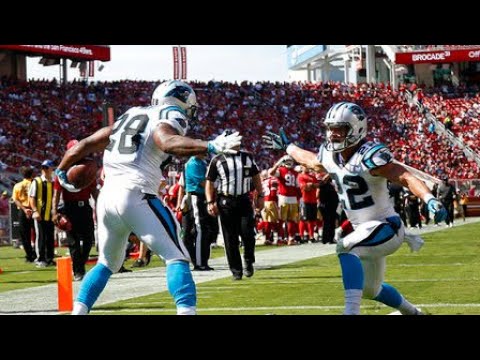 This week my co-worker, Jeff Krisko, suggested that starting Tarik Cohen is the smart fantasy football play.  It is hard to fault his logic.  I’m a Bears fan, and I can tell you that there is a lot to like about the human joystick.  Cohen is the 13th ranked running back in standard leagues and the 10th ranked running back in PPR leagues.  However, if you want a running back to play based on match ups, you should start Carolina Panthers running backs.  That’s right, not just Jonathan Stewart, who I recommended in week one.  Not just Christian McCaffrey, who I suggested was the smart play in week three.  You should start ALL the Carolina Panthers running backs.

There are some issues with Cohen’s match up that week that make me nervous.  First off, he is playing the Green Bay Packers on the road in a Thursday Night Football game.  Thursday night games tend to lend themselves to very sloppy football.  While this could mean he has a Gurley like week three performance, he could also just put up a goose egg.  I think there is a lot of potential for boom or bust with this match.

Moreover, while the Green Bay Packers have given up the 8th most fantasy points to running backs this season, most of those numbers have come on the ground.  The Packers have given up the 7th fewest receptions and the 12th fewest yards to running backs this season.  To me, that means the guy you should be starting is Jordan Howard, who you already know I love.

While there is a lot to like about Tarik Cohen this week, there are also reason to be concerned.  There is a much better match up if you start Carolina Panthers running backs.

Most important of all, the Carolina Panthers don’t have anyone else to turn to.  Greg Olsen?  Dead!  Kelvin Benjamin? Dead!  Neidermeyer? DEAD!  The Panthers game plan is going to rely heavily on the run just out of pure necessity.

So if you want to risk the unpredictability of Thursday Night Football, go ahead and start Tarik Cohen.  But if you want to play the best possible match up, start Carolina Panthers running backs.

One Comment on “Fantasy Football Absurdity Check: Why You Should Start Carolina Panthers Running Backs over Tarik Cohen”