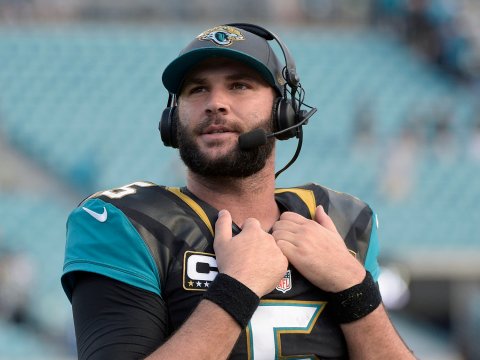 The waiver wire quarterback options for week four offer some very interesting options.  Week three of the NFL football season has made the picture for who to start a little bit clearer.  What we really learned in week three is that there is no way of predicting which quarterback will be good in a given week.  Cam Newton, against one of the worst pass defenses, proved he could be badder than bad.  Blake Bortles almost made us forget that he is Blake Bortles.  So let us examine what our best waiver wire quarterback options for week four are.

Tyrod Taylor – Owned in 41% of leagues – Tyrod Taylor threw for 213 yards, 2 touchdowns and 0 interceptions on Sunday against the Denver Broncos.  If you are desperate for help at quarterback, Tyrod is an interestion option.  There are few quarterbacks who have a more favorable schedule going forward.  Taylor has six more games against defenses that have given up the tenth most points to quarterbacks or better.  He is definitely one of the safest bets

Jared Goff – Owned in 12% of leagues – Jared Goff had a very strong showing against the San Francisco 49ers on Thursday, throwing for 292 yards and 3 touchdowns.  While Tyrod Taylor is the safer waiver wire week for pick up, Jared Goff is the most exciting.  Sean McVay clearly likes to throw the ball down the field.  Right now, Goff is throwing for 10.1 yard per attempt.  That leads the NFL, just edging out Tom Brady and almostone full yard per attempt more than Matt Ryan.

Blake Bortles – Owned in 12% of leagues – Blake Bortles went off on Sunday in the London game, throwing for 244 yards and 4 touchdowns.  Don’t let yourself be fooled.  In England he might be good, but in America he is still a terrible quarterback until he proves otherwise.

Andy Dalton – Owned in 45% of leagues

DeShone Kizer – Owned in 9% of leagues