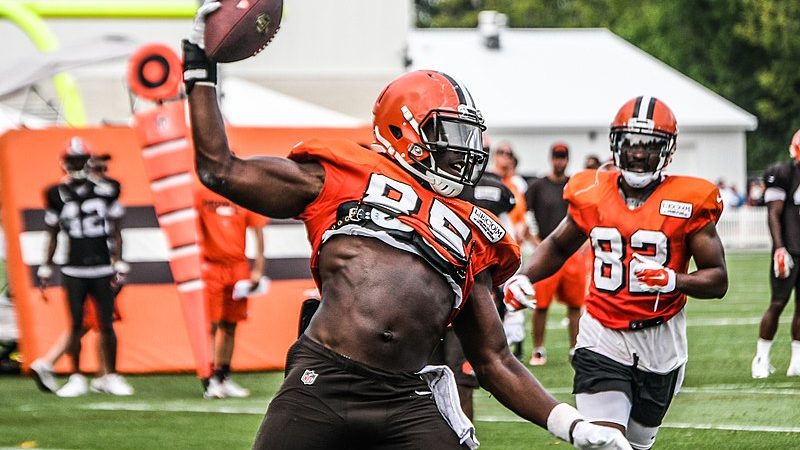 It’s that time of year once again! Football Absurdity will bring you a breakdown of every notable fantasy football-relevant player throughout June, July, and August. We continue with the tight ends. Today, we take a look at a tight end who hasn’t done much yet in the league, but who has a chance to break out in 2022. What is there to like about David Njoku? Well, let’s take a look at his 2022 fantasy football player profile to find some answers!

It’s been a rough five years in the league for David Njoku. He played just seventeen games between 2019 and 2020, and he kept getting jammed into crowded situations outside of those two years. Because of this, Njoku has been a top-ten tight end just once, back in 2018, when he finished with 89 targets, 639 receiving yards, 56 receptions, and 4 touchdowns. All of those statistics finished inside the top ten. Also, remember what I said about injuries in 2019 and 2020? The last time we saw a fully-actualized David Njoku, he was a top-ten tight end.

I said “fully actualized” because, in the meantime, David Njoku ended up with both Harrison Bryant and Austin Hooper as running mates. Bryant is young, and on the come-up, so it remains to be seen what he can do. But, the Browns already bounced Hooper out of Cleveland and used the salary cap savings to give David Njoku a four-year, $56.8 million contract this offseason. That’s probably because David Njoku was good last year, just under-utilized… in an offense that loves to use tight ends.

The Browns targeted tight ends at the third-highest rate last season and in 2020, funneling 29% and 30% of targets, respectively, to tight ends. But, nothing ever came of this because the Browns split these targets up among three tight ends, with Austin Hooper and David Njoku leading the way with 61 and 51 targets in 2021, respectively.

Now, Njoku has just Harrison Bryant to contend with, and he still has all the skills that made him a top-ten tight end in 2018. Last year, per PlayerProfiler.com, Njoku ranked fifth in contested catch rate, fifth in yards per target, sixth in fantasy points per target, and eighth in catchable target rate. His main problem was that the Browns just didn’t use him. Now, they have a questionable wide receiver corps, with Amari Cooper as the only problem talent in the group. Should Njoku stay healthy, he should see a big target volume. And should he see a big target volume, he should be a top-fifteen tight end.

David Njoku Salary Cap Value: $0
Draft Ranking: Find out for your league settings in a Beersheet!

David Njoku comes off the board in about 40% of drafts. And this makes sense, as the majority, but not the vast majority, of drafts, should not have 20 tight ends drafted, and he’s TE20 (152) by ADP. Personally, I put him last among the Gerald Everett, David Njoku, and Albert Okwuegbunam group, but I can’t fault anyone who wants to draft him. Personally, I would just keep an eye on him in a standard-sized league. Anything deep, go ahead and take him with one of your picks after #150, but in a ten and twelve-team league, the upside just might not happen, and you’ll be stuck with a name that you’re afraid to remove from your fantasy football roster.

It all comes together for Njoku, who finishes as TE10.

During the middle of a joint practice with Detroit, David Njoku asks Jared Goff if he “wants to see a magic trick.” He makes a pencil disappear, and then demands that everyone starts calling him “The Njoker,” and goes around asking everyone if they know how he “got these scars.”