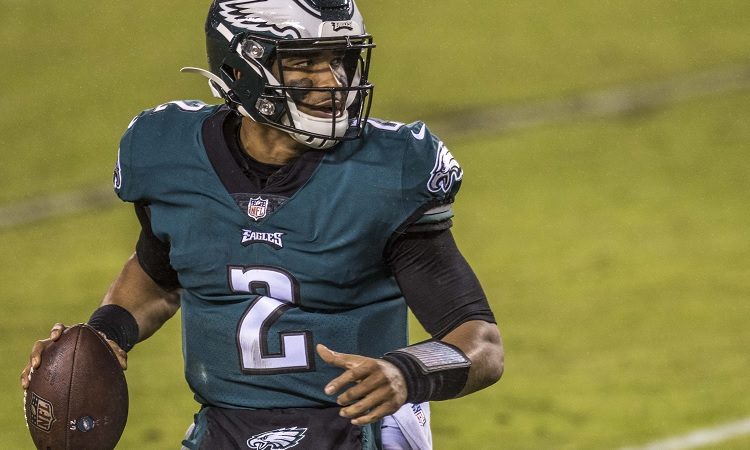 It’s that time of year once again! Football Absurdity will bring you a breakdown of every notable fantasy football-relevant player throughout June, July, and August. We start off with the quarterbacks. Jalen Hurts got one of the biggest upgrades this offseason, with the Eagles getting A.J. Brown in a draft day trade. This is huge for Hurts, as he can trade in passes to Quez Watkins, Jalen Reagor and J.J. Arcega-Whiteside for A.J. Brown targets. With this in mind, I think he’s a top-five quarterback this year, and given his draft day price, he represents one of my favorite values. Let’s dive into Jalen Hurts’ 2022 fantasy football player profile.

Jalen Hurts finished 2022 tied with Aaron Rodgers as QB6, with 21 fantasy points per game. He was also one of the most consistent fantasy football quarterbacks last year, finishing inside the top-12 in two-thirds of his games. This was more frequent than QB1, Josh Allen, and in fact, more frequent than every top-ten quarterback last season except Dak Prescott and Patrick Mahomes. Hurts was remarkably consistent last year thanks to his rushing floor; he led all quarterbacks in rushing yards and rushing touchdowns.

But, the passing upside is where Hurts found himself struggling to knock into the top five. While he was a remarkably consistent QB1, he rarely spiked, with just three top-five games, which tied him with Lamar Jackson and Joe Burrow in that regard. Hurts has a bad rap as a bad passer because he finished with just 3,144 passing yards last year, but on a per-attempt basis, he was on par with Josh Allen and Lamar Jackson (both with 6.9 yards per attempt in 2021). And he got a top-target upgrade, with A.J. Brown making the entire passing corps better and pushes out borderline guys like Quez Watkins and Jalen Reagor.

Jalen Hurts Auction Value: $13
Draft Ranking: Find out for your league settings in a Beersheet! (coming in early July)

He sits between the Kyler Murray and Tom Brady tier in salary cap drafts, and above the Dak Prescott, Matthew Stafford, and Russell Wilson tier. While those three players are quality fantasy assets, I’d rather spend the extra couple of bucks to go get Jalen Hurts onto my roster, who has QB1 upside. In snake drafts, he’s going between Clyde Edwards-Helaire and Devin Singletary and is just two picks ahead of Aaron Rodgers. Do the right thing, do what is necessary, and pull the trigger on Jalen Hurts there.

Jalen Hurts to A.J. Brown is the new hot connection and it vaults up his passing totals while he maintains his rushing floor on non-A.J. Brown plays. He finishes this year as QB1. Yes, he has that upside.

Nick Sirianni gets really into Gardner Minshew memes and decides to make the switch to bench Jalen Hurts so he can point and laugh and clap and go, “like from the internet!!!”