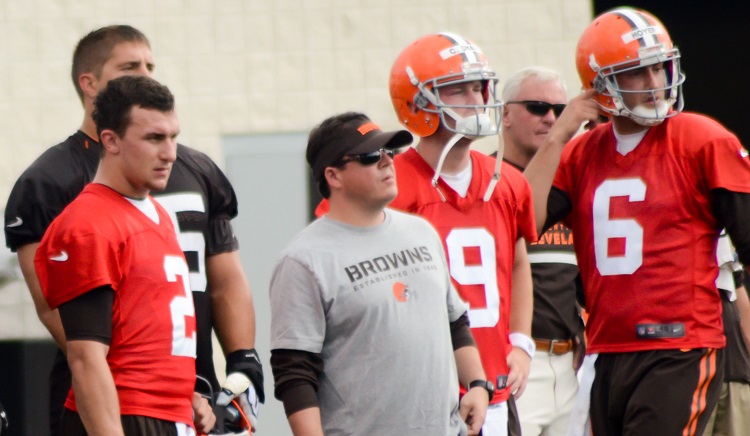 Headensand: Renown leader Bill Belichick will serve as the Tony Abbott to K.J. Costello. You know who else went to Mississississippi State? Dak Prescott. But Costello brings more to the table than Prescott. For instance, I’ve never shrieked while staring at Costello’s leg.

Revlooh Nave, FA Arch-Enemy: He’s got the skills of Peyton Manning and the fiery passion of Gordon Ramsey. He went to Northwestern, so he is probably smart. In reality, the Cardinals are picking him in order to have a fight-to-the-death Thunderdome scenario to toughen up Kyler Murray. That was not a metaphor!

Nave: This is an easy one. After watching Dean Spanos pick a player named Book, Jon Gruden will attempt to one-up his divisional rival by picking a player named Cook. Plus Cook and Gruden both went to the University of Dayton which seems a random enough reason to sway Jon.

Nave: Downside: Joseph is about 20 years away from starting in the NFL. Upside: The Dolphins are going to want to lock up Dan Marino’s two-year-old grandson ASAP. They missed out last year, and won’t make that mistake again!

Nave: Gabriel had 32 touchdowns and 4 interceptions in the tough-as-ice National American Athletic Conference in 2020. The Draft Network says Dillon has what it takes to make it in the NFL. Right now the biggest obstacle to his landing on a team in the 2021 draft is that he hasn’t actually declared, and therefore can’t be drafted. But when in the past has Dan Snyder worried about pesky rules?

Nave: Angry at the world for being a constant laughingstock, Bears’ management decides to double down on a risky QB from UNC. Howell shocks the world by insisting he instead work at his dad’s auto parts dealership, so the Bears throw a hundred million dollar contract at him. The Bears then cut him midseason leaving $87.65 million in dead cap space. Bet on it!

Georgia O’Keeffe, Deceased Painter: As was the main theme of my art, Penix has a name that hints at something. Something large and beautiful. Something that should rise up and be ridden joyfully. Of course, I’m referring to that legendary beast: the Phoenix.

Billy Graham, Dead Dude: The NFL has angered many conservatives with its views on wine-colored Gatorade and end zone dancing. They can atone by having the holiest of teams, the Titans, invest in a QB from a Christian university. Plus he was as perfect as God, himself, throwing zero interceptions in 2020. Some may argue that Ferguson only threw 37 passes, but that’s more passes than the years it took Jesus Christ to save the Earth, Mankind, and many aliens!

Jay LeBrake, President of the Chase Brice Fan Club: Though they already took Justin Fields at 3rd overall, the Jets will come to the realization that a mobile QB who is not used to taking hits won’t survive behind that horrible Jets line. Instead, they will look for someone experienced with taking sacks. Our man Chase Brice is the best at this. He took an NCAA-leading 34 sacks in 2020. Plus, they get double trouble in terms of experience, as Brice also led the NCAA in interceptions, while still leading Duke to a 2-9 record.

Adolph Benito, Unfortunately-Named Sportswriter: It is widely known that Ben Roethlisberger will violently devour any QB the Pittsburgh Steelers draft. So, this is going to be a tricky one for them. Culpepper ranked 3rd-worst among all eligible 2020 NCAA quarterbacks in terms of completion percentage. Roethlisberger only likes delicious, hopeful prospects, so maybe they can sneak this one past him long enough to train Rex using some sort of sped-up montage.

For more of our special brand of predictions, draft your discord, podcast, and Patreon links from the same team: