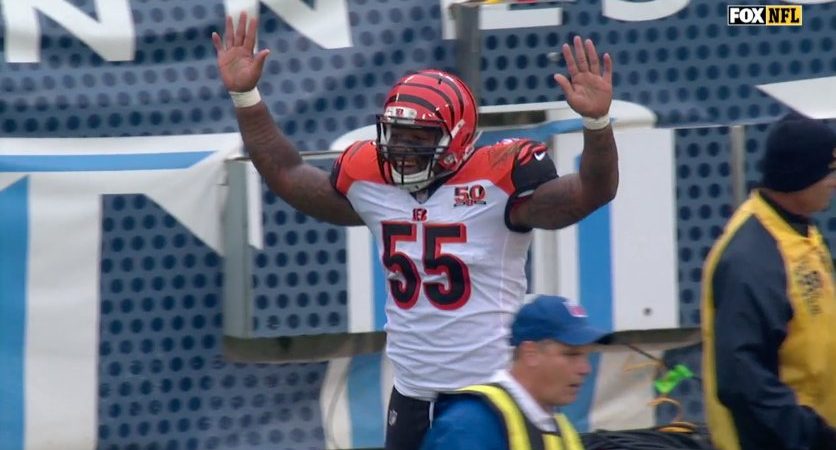 I did not have to look long for these hilarious week 10 mistakes. You know, in case that was something you were worried about.

Benny Cunningham was ruled out of bounds at the opponents’ two-yard line. Instead of taking first-and-goal at the two, Bears’ coach John Fox decided to challenge the ruling that the ball carrier went out. The refs took a look and agreed: Cunningham had stayed in bounds long enough to fumble the ball into the pylon. Fox won the challenge, and the ball was given to the other team at the 20.

Upon arriving at the stadium in Atlanta, Green presumably thought that the place could use better infrastructure. This is the only possible reason for why he spent most of Sunday’s game impersonating a turnstile. Green allowed five sacks and got utterly condemned by Troy Aikman before getting replaced.

3. Vontaze Burfict Celebrates Being an Asshole

Just a few plays after drawing an unsportsmanlike conduct penalty for a late hit, Vontaze Burfict was ejected for contacting an official. Burfict, often mocked for dirty play, decided to celebrate his first career ejection by putting on a show. He waved his hands to the crowd, said hello to a few “lucky” audience members, and even gave someone a jumping high-five on the way out. The angry, vengeful crowd LOVED IT!

It was justifiable that the 49ers would be elated after winning their first game of the season. However, it really didn’t justify pouring Gatorade on coach Kyle Shanahan like they had just won the Super Bowl. Gatorade showers should be saved for truly memorable events, which is why I keep a bucket handy to pour on myself whenever I make a joke that doesn’t totally suck.

5. Chargers and Jaguars Fight Tooth-and-Nail to Lose the Game

Needing a field goal to tie in the final minutes, the Jaguars were elated when the refs called an unnecessary roughness penalty on the Chargers. So elated, that Marquis Lee did a stupid little dance. After some discussion, the refs decided to pick up the unnecessary roughness flag and instead give a taunting penalty to Lee. Blake Bortles then does what he does best, and tossed up a balloon for the Chargers to intercept. The Chargers, who fumbled the ball away while trying to run out the clock on their previous possession, went three and out. Jacksonville managed to not screw things up, and tied the game. In overtime, Jacksonville had their game-winning kick blocked, but the Football Gods were so sick of this pathetic game that they allowed the ball to go through the uprights, anyway.

For more fun laughing at people doing stupid stuff, check out these links:

3 Comments on “The Five Most Absurd Week 10 Mistakes”