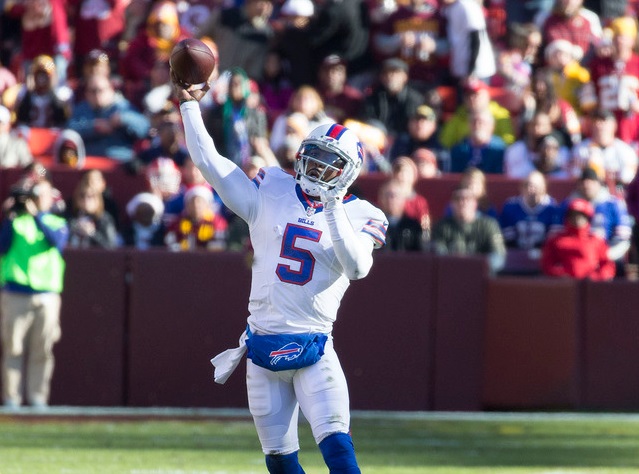 Fun Fact: I set a record for most days without curling up in a tiny ball under the kitchen table, my tears streaking down the screen of my tablet showing my fantasy football scores. This week I might skip the Thursday Night Football and see if I can make it to three days!

That’s not the only excitement the NFL provided, this week. Checking out these shocking facts about week 2 in the NFL and have your faith in a just universe totally rocked!

Fun fact: Color rush was really stupid before the invention of color television

1. A stat that has been frequently bandied about this week: Cincinnati opened with two home games, and didn’t score a touchdown in either. This is the first time that’s happened since the 1939 Philadelphia Eagles.

2. Michael Crabtree has had two 3-TD performances in his last 6 games (source: Me, baby)

3. Cleveland has had 14 consecutive road losses

4. Browns left tackle Joe Thomas hasn’t missed an offensive snap since joining the league in 2007. He played in his 10,000th straight snap on Sunday

5. Carolina’s defense held the Bills to 39 yards in the first half. Buffalo slumped along to a 176-yard day

Tyrod Taylor’s goal is to win enough games that all the good draft quarterbacks are gone before Buffalo gets to pick. The Bills’ management’s goal is to stop him

6. LeSean McCoy has become the fourth active back to reach 3,000 career receiving yards. The others are Darren Sproles, Frank Gore, and Matt Forte

7. The Cardinals are the oldest franchise in the NFL. Yet Bruce Arians will become their second-winningest coach with his next victory, which will only be his 43rd  (Source: Me and this wiki page)

8. Indianapolis has started 0-2 for the fourth straight year

9. In the Chiefs-Eagles match, the starting tight ends for each team (Kelce, Ertz) combined for 200 receiving yards (Source: My beer-addled brain which can barely add at this point)

10. Cleveland is the betting favorite to win this week at Indy. This is the first time they have been favored to win since week 14 of 2015, and their first time being a favorite on-the-road in almost 3 years

The Colts should just tank all season, so they get a high draft pick and can grab a franchise QB. Oh, wait…

11. For the first time in his lengthy career, Tom Brady threw three TD passes in the first quarter

12. The 128,251 combined passing yards by the starting QBs in the Patriots-Saints contest was obviously a record

15. Dallas lost to Denver for the sixth straight time. They haven’t won in the Mile-High City in 25 years

Guess what else the Cowboys haven’t done since the 90s… Watch Johnny Carson host the tonight show, that’s what

16. Todd Gurley scored his second and third touchdowns of the year on Sunday, giving him half of his entire total from last year. Gurley also scored his first receiving TD of his career (Source: I looked at a stats sheet)

17. Russell Wilson hit Paul Richardson for a touchdown with 7:04 remaining in their game against San Francisco. This was the first touchdown for either team, this year (Source: I live near Seattle and no one will shut up about the Seahawks, like ever).

18. Carlos Hyde rushed for 124 yards, 25 more than QB Brian Hoyer threw for (Source: I can subtract)

19.  Marvin Jones already has half as many touchdowns through two 2017 games as he did in all of 2016. Fantasy owners, take that with a bit of salt: Jones started hot last year but stopped scoring after week 6

20. In game one of the 2016 season, Eli Manning threw two touchdowns to tight ends. The remainder of the season, he only threw one more touchdown to a tight end, a feat he equaled by hitting Evan Engram for a score on Monday night

I place all of the blame on Eli for why “Will Tye: The Giants’ Guy” is not a viable fantasy football team name this year

One Comment on “20 Fascinating Facts about NFL Week Two”