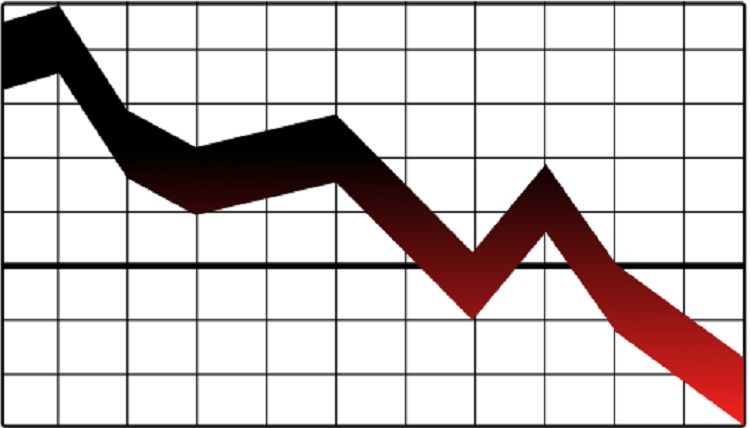 Hi! If you don’t know me by now: I’m Evan Hoovler, the hardest mockin’ person in the Salary Cap Business!

I mock so much. Today my doctor told me to stop mocking immediately. I said, “am I gonna die?” and he said, “no, I’m trying to give you a prostate exam.”

Then, at nomination 41, Diontae Johnson was nominated. Yahoo projected him for $29, I got him for $9:

I define the “wide receiver market crash” as the point where wide receivers go for less than half of their projected value. According to my mocks, this crash happens in over 90% of all salary cap drafts. When it doesn’t happen, you’ll know and I’ll explain how below.

But first: Why does the crash happen so regularly and how does my ability to predict the WR market crash allow me to supercharge my roster?

Let’s start with the why: A salary cap redraft is a market, like in economics. You’ve probably learned that markets are driven by the holy duality of capitalism: Supply & Demand. When the supply of a certain tier player is less than the demand, you get a bidding war that drives up the price. An easy example is the last RB in a tier: There are multiple managers who still need a good RB, but the supply is exactly 1, so there is almost always a huge inflation on the price that RB is rostered for.

No matter how many RBs are in your tier 1, it’s undoubtedly fewer than the number of managers in the league. Demand is greater than supply, so these RBs usually go for more than listed value (if not: get one). Same for the WR1s and a lot of the RB2s and two or three TE1s. Side note: This year there are a whopping 6-10 QBs in the top tier, which is why QB prices are lower than ever for a manager who doesn’t go all in on the first few nominated.

However, somewhere around WR2, demand drops sharply and supply spikes. After about Mike Evans, Diontae Johnson, Michael Pittman, and AJ Brown, there are a slew of WRs who are all regarded in the same tier. Heck, I named 12 WR2s that I would not be surprised to see break out into WR1 territory this year. That’s a ton!

So, at some point where WR2s are still waiting to be nominated, managers become extremely unmotivated to get into a bidding war on all of them. Some of them, sure, but never all of them. The supply greatly trumps demand, which leads to a market crash: Decent WRs go for less than half of their listed value.

Moving on to “how does my ability to predict the WR market crash allow me to supercharge my roster?” Nearly every savvy manager, when they get a guy under their budgeted amount, will immediately start looking for a player they love that they can spend those saved dollars to win a bidding war over. However, figuring out I’m going to have those savings ahead of time allows me to win bidding wars long before I get that savings. In other words, I know nearly exactly how much I can afford to overbid when the top RBs and WRs are nominated.

In this case, knowing I would get a solid back-end WR1 for a steal allowed me to “pre-spend.” Naturally, I wanted to put that on running backs. However, when I got Kamara and Aaron Jones for a modest $90 total, I pivoted my over-spending to WR and TE. This allowed me to get Travis Kelce and Cee Dee Lamb. My final roster looked like this: 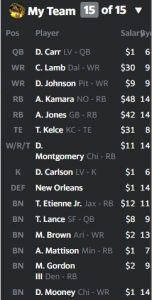 That is a hyper-competitive team, and it will be your team if you follow one short rule to hone your market crash predictions.

That rule is: Pay attention to the early bids in relation to their listed prices

Usually, if managers know what they’re doing, they will bid higher than listed for the top guys. After all, it just takes 2 managers to both really want a guy, and you’ve got yourself a bidding war. Even the back-end RBs and higher-up QBs, TEs, and WRs will usually net more than their listing.

The thing to keep in mind is that, for every dollar a manager spends over a listed guy early, that’s $1 that won’t be bid on a guy later. Yahoo, ESPN, Sleeper, all the major sites make sure that all their listings add up to exactly the total amount of salary cap dollars held by all the managers. That’s called a “closed system economy.” Despite the fact that we’ve all experienced the feeling that “every salary cap draft is different,” there are only a few patterns of spending trends that can happen. The most common pattern is people going about 5-10% more for the top 20-30 players. This is why CMC and Jonathan Taylor get listed for ~$60 but usually go for $65-72. Let’s call this Trend A.

Trend A follows a very human way of valuing players, and thus happens in about 2/3 of all salary cap drafts. So when you see most of the first nominations, if the first 5-10 fetch about $5-8 more than listing, you can be pretty sure that you are in a Trend A draft. In a trend A draft, the WR market will usually crash at around mid-WR2. So WR15 for a ten-team league, WR 18 for a twelve-teamer, etc. Those players are listed for around $20-30 depending on your league. Remember: I define market crash as when a WR goes for 50% or less than listed value. That means if you are willing to wait for your WR2, you can save (and pre-spend) $10-15 if your draft follows this trend.

Now, keep in mind, this can happen several ways: Every player goes for $3-8 over is one way, but there are several other ways to get there. Maybe a few trigger-happy managers bid $10-15 for the first few players, then run out of $ and the more conservative managers start getting players at listed value or a buck or two more. Maybe it’s like newer leagues where the first few guys go for listed (or even less) then everyone starts bidding $8+ over once sticker shock has worn off. Whatever the ingredients, the net recipe yields an extra $10-15 early for savvy managers who are counting on a crash later on.

Keep in mind this is just for getting one post-crash WR. If you are willing to get two you get double the savings. My whole BBQ strategy, this year, no matter how many teams in the league, is based on counting on two WR2s later to allow you to Hulk out your early roster. Throw in the fact that my strategy means I’ve been doing most of my tape-watching on lower-end WR2s, and you can use my list to get not two but four of the 15 WRs I think can net you above-average returns.

What about other trends? Well, let’s start with Trend B: Most Managers Are Going Nuts Early. This was the trend that happened in my stream at the beginning of this article. If a lot of managers are going $8+ over listed guys, the WR market should drop out right about the start of the WR2s. So WR12 in a 10-team league, WR14 in a 12-teamer, etc. Those guys are listed from $28-40, so you can count on even more value to spend early.

Note that this doesn’t even need every manager to be all in on early bids. In the draft I linked, three managers were totally sandbagging on huge stacks of reserve $. They could easily outbid me on WRs, and they did. But once they’d filled up a few WR slots, they all began to wait for their favorite guys. That greatly decreases the demand on WRs, which allowed me to snake Diontae from three high bankroll managers who were clearly waiting for other guys they wanted more.

What about when the market isn’t bidding significantly over listed prices, early? As I mentioned to start, this happens in less than one-of-ten drafts, but it does happen. When that happens, the WR market has a risk of crashing too late for you to get great value. So when that happens, be sure to get in there and get your guys early for a few bucks more than listed, and know that you’ll have to be savvy about bidding for the players you have on your list for about what they cost. Otherwise, you’ll end up with a lot of money when the WR2s start to dwindle, but find yourself still in bidding wars over most of them, leading to costs that are comparable for what higher ranked players went for.

If the first 10 players go for $2 or less than listed value, get the guys you want for about market value NOW rather than gamble on a deal later.

So that’s it: The simple rule for this “magic trick” I do to figure out where I’m going to get savings later in order to “travel back in time” and spend those extra bucks early. Happy drafting, I love you!

We’re all about fantasy football discussion in our Discord, or give us a follow on Twitter. Check out all our archived mocks (snake and salary cap) on our Youtube. Here’s our Twitch stream, again, in case you missed it the first time. We live stream salary cap and snake mocks from 1 PM PST each weekend day until people stop watching (usually 3-5 hours).

0 Comments on “The WR Market Crash: A Simple Tool You Can Use to CRUSH Your Salary Cap Drafts”