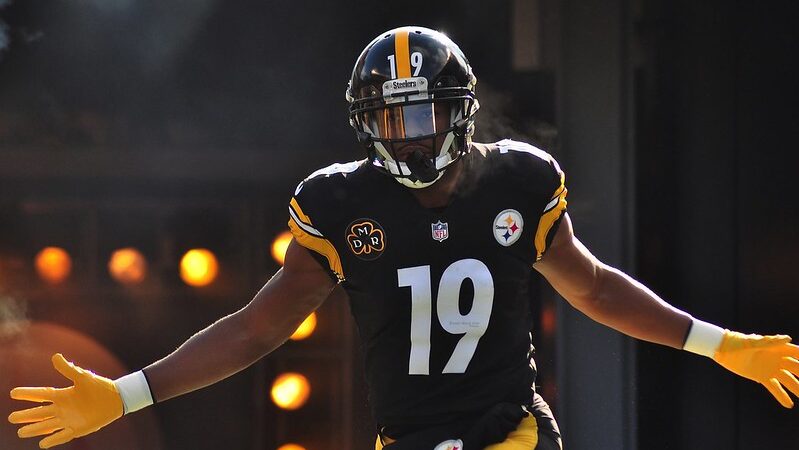 It’s that time of year once again! Football Absurdity will bring you a breakdown of every notable fantasy football-relevant player throughout June, July, and August. We continue with the wide receivers. Today, we take a look at a wide receiver who might have one of the biggest talent upgrades at the position, going from an old and decrepit Ben Roethlisberger to entering his prime Patrick Mahomes. Many want to doubt him, but JuJu Smith-Schuster is only 24 and already has a 1,400-yard season under his belt. What can he do in his first year in Kansas City? Let’s take a look!

First, we have to ask ourselves which player is closer to the one who will throw him balls in Kansas City, the Human Ent, Ben Roethlisberger, the last couple of seasons (and Duck Hodges & Mason Rudolph the year before)? Or maybe the Ben Roethlisberger who threw JuJu 245 balls for 2,343 yards and 14 touchdowns in JuJu’s age 21 and 22 seasons? I am going to say that Patrick Mahomes is closer to the latter than the former. So, we can check that box.

Then, you have the idea that JuJu hasn’t done it without another elite pass-catching weapon on the field to distract the defense. But, how do we know that he hasn’t had another elite receiver on the field? Claypool and Diontae Johnson both have that in them, but they’ve been held back by one-foot-in-the-grave Ben Roethlisberger. There’s also that Travis Kelce is an elite pass catcher that will distract the defense, so if you feared that JuJu needed one of those to be able to return another great season, then I have great news for you!

I don’t want to belabor the point, but I can’t underscore how much I think the last few years of JuJu’s career stem mostly from the fact that Ben Roethlisberger has been either hurt, or bad, or both, for the last three seasons. And given that you’re diving in with just faith that JuJu will be back with the Chiefs, his draft day price is extremely palatable.

JuJu Smith-Schuster Salary Cap Value: $3
Draft Ranking: Find out for your league settings in a Beersheet!

As of right now, you have two camps with JuJu Smith-Schuster. Camp A says that the Chiefs don’t really have a Tyreek Hill-like presence anymore, as they traded him to Miami. As such, they try to figure out which player on the roster is the most like Tyreek Hill. That’s why you get people who want to lean into Marquez Valdes-Scantling, Mecole Hardman, or Skyy Moore as the top receiver there because they perceive them as coming closest to the Tyreek Hill profile of the players currently on the team.

Then you have Camp B, where I reside. Camp B thinks that Andy Reid is going to cook up a brand new-looking scheme thanks to losing Tyreek Hill. This is where JuJu will shine, as he has the ability to get open underneath, or deep, and to take the ball a long way (he has two 97-yard touchdowns under his belt). While JuJu missed 12 games last year due to an injury, it was to his shoulder, so there’s no anticipated speed loss thanks to his injury (because it’s his shoulder).

So, these two camps are at odds, and it feels like Camp A is winning, and if you’re in Camp B, like me, then you can really take advantage of Camp A driving everything down on JuJu. The Football Absurdity Podcast crowd all has JuJu top-20 in their preseason rankings, so we all can co-sign him as an absolute steal at WR34 or $3.4 in a salary cap draft. You can bump him inside your top-30 by ADP or double his AAV if you want to make sure that you get him if you think that Patrick Mahomes and JuJu will make sweet music (and they will).

JuJu Smith-Schuster and Patrick Mahomes become the hottest duo in the NFL, and they’re all over T.V. doing great things.

JuJu Smith-Schuster and Jackson Mahomes become the hottest duo on the internet, and they’re all over TikTok doing dances to Doja Cat songs.