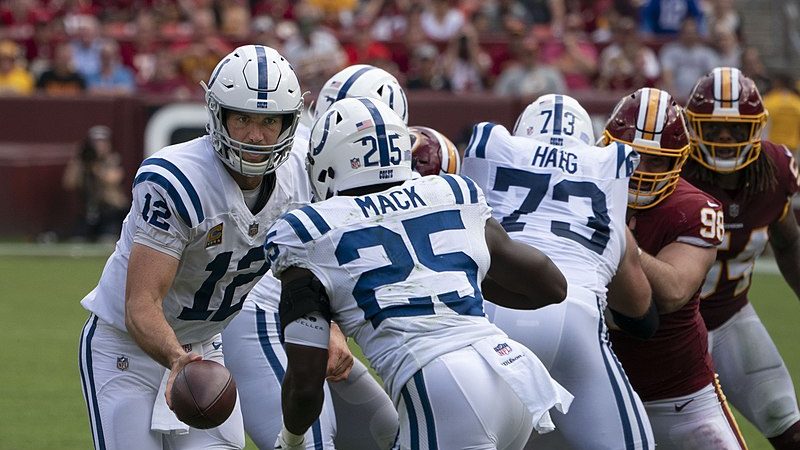 It’s that time of year once again! Football Absurdity will bring you a breakdown of every notable fantasy football-relevant player throughout June, July, and August. We continue with the running backs. Today, we take a look at a running back whose main sin is tearing his Achilles way back at the beginning of the 2020 NFL season and getting Wally Pipped by Jonathan Taylor.  Now, Mack has moved on to the Houston Texans, one of the most hilariously downtrodden franchises in the current NFL landscape. But, has the hate gone too far on Marlon Mack? Is he worth a pick at his cost in fantasy football leagues?

First of all, I am going to be intensely honest with you: there isn’t much about anything Marlon Mack has done since before we knew what COVID-19 was that makes me super bullish about his prospects. But, considering he tore his Achilles eleven snaps into the 2020 season, then reinjured himself after 30 touches in 2021 while Jonathan Taylor ran roughshod all over the NFL, so you can sort of give him a pass for the last two seasons.

The last time we saw Marlon Mack get a full complement of touches, he ended the year averaging 84 yards per game on 18.6 touches per contest. Mack chipped in 8 touchdowns, as well, finishing as PPR RB22. The Colts also went 7-9 that year, so it’s not like Mack is a front-runner who can only produce on great squads.

While the Texans ranked thirty-first in running back scoring last year (PPR), they ranked twelfth in running back rush attempts, which are Mack’s bread and butter. They also don’t boast much of a receiving corps, with John Metchie III and Nico Collins fighting over who gets to be the offense’s WR2. His only real competition for running back touches, Dameon Pierce, is basically a slower and less bursty version of pre-injury Marlon Mack. That is to say, his best-case scenario is likely the guy who is currently ahead of him on the depth chart.

I think that Mack staves off Dameon Pierce, but I also think that he isn’t so much of an upgrade over Pierce that he could struggle to not have the whole situation slip back into a messy timeshare.

Marlon Mack Salary Cap Value: $1
Draft Ranking: Find out for your league settings in a Beersheet! (coming in early July)

The Houston Texans, with one major exception (Brandin “just” Cooks) and one deep league dart (Brevin Jordan) are a massive hands-off for me in 2022, but we needed more than just two Texans player profiles, so here we are. Please don’t draft Marlon Mack, unless I made an exceptional case for him. He goes as RB50, pick 160 overall. Given that most 15-round, 12-team drafts only go to 156 picks, that’s an exceptionally prudent pick. I wouldn’t be getting Marlon Mack onto my roster other than in deeper leagues or 20+ round drafts. He simply doesn’t have much of an upside there, not even for the $1.9 he costs in salary cap drafts.

Marlon Mack leads the Texans in running back touches and finishes as RB25 on the back of 1,100 total yards and seven total touchdowns.

Dameon Pierce and Marlon Mack split everything down the middle in the backfield, to the point that they get an apartment together just to hilariously draw a line down the middle of everything. Also, now they’re trapped in the TV; it’s season two of WandaVision, and Wanda is about to turn them into her version of The Odd Couple.