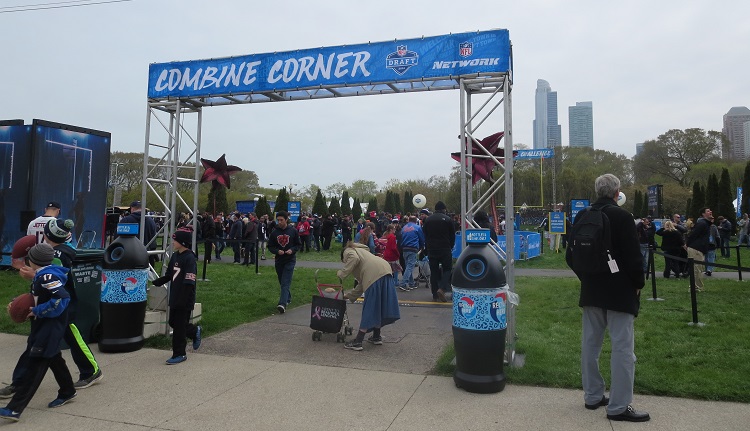 Normally by this time, the NFL Combine would have wrapped. Tons of numbers would be available reflecting speed tests, strength tests, and drug screenings. Pundits would be debating stats and getting into fistfights on Twitter. How far can a player jump? How many reps can he do? Can he run around cones fast enough? This year absolutely no one knows and it is terrifying! This is because the NFL Combine was canceled due to the Tiger Woods tragedy. Turns out, his short game had been propping him up all these years (because his drives aren’t so good).

The dearth of athletic window-dressing the combine normally provides is resonating throughout the industry. For decades, NFL media outlets have depended on these stats to get their business through the frigid, Narnia-like winter of the NFL’s dead time. Twitter is on the verge of collapse without Tweeters being able to argue that Justin Fields’ ability to jump and touch something slightly higher than Zach Wilson’s means Fields will be light years better in the NFL, and that Wilson is cold doo.

The lack of talking points is threatening to take down the entire sports media history. Because of this, struggling broadcasters have appealed to congress. The U.S. Senate is now expected to vote on a package that will provide each person in the known universe with 1400 arbitrary data points. To avoid a filibuster, the package will also strip the presidential election voting rights of anyone with the last name Washington.

However many sports reporters are saying that’s not enough, such as Newport Sun sports editor Fred Redd. Redd told reporters, “that’s not enough.” Because of this, the NFL has unveiled a set of remote combine tests. These tests are designed to be run with minimal social contact, because we are all too busy mourning Tiger’s loss of common sense. The tests are currently being run, with several already wrapping up. One such finished test is called the “standing high jump.” This tests how high a player can get the top of their head while keeping both feet flat on the ground.

The standing high jump has buoyed the draft stock of Texas OL Samuel Cosmi. Cosmi led the remote combine with a standing high jump of six feet, seven inches. The shocking part is that Cosmi managed to reach this height despite weighing over 300 pounds. That unequivocal athletic prowess will undoubtedly allow Cosmi to coast through the NFL. Thus, he should be drafted first overall. I’d also like to add that my Twitter handle is @evanhoovler .

For more Football Absurdity, click these links back-and-forth as much as possible: