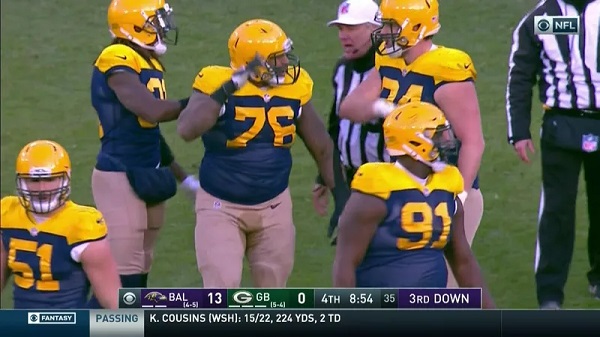 Please enjoy the most absurd mistakes of week 11 in the NFL. Please don’t don’t enjoy them.

Special thanks to OxySnake from the Something Awful forums for spreading this:

The old Georgia Dome in Atlanta was destroyed. The Weather Channel put their camera right where they expected to see the most action and… they failed hilariously:

I am CRYING. The Weather Channel set up for a live shot of the Georgia Dome being imploded, and at the perfectly wrong time ... this happened (via @ajc): pic.twitter.com/LA0cXpC7oX

If you listen closely, you can hear the bleeps from whatever intern was tasked with setting up the camera.

This made me laugh so hard I peed my pants. Fortunately, I wasn’t on national TV, unlike…

The Green Bay, “I Hate These Uniforms So Much I Will Soil Them,” Move

I mean, if 11 Ravens players were flying at me, I would probably pee myself, too. And also nosebleed. I nosebleed when I fear for my life.

No nosebleeds happened, despite the high altitude of the annual Mexico game. However, there was a propensity to put one’s foot in one’s mouth, as illustrated by

Tom Brady needing to apologize to his wife for a  press conference slip.

You know, my family’s not here, my kids aren’t here, there’s nobody telling me what I did wrong in the house, so it’s just being at home and now it’s being here and trying to just figure out how to win a game.

Still, it wasn’t even the biggest walk-it-back moment of the week. Bruce Arians initially took blame for his call on a critical 4th-and-one. Arians obviously spent the rest of the night thinking, as the next day he came out with this gem:

“I take all that s— back I said yesterday,” Arians said during his Monday afternoon news conference. “That was a damn good call, and we busted an assignment at the point of attack. That was an easy pickup.”

Maybe don’t say things you aren’t willing to take back, a creed no doubt repeated by denizens of Milwaukee’s Bavarian Bierhaus, which had a season-long policy of “free beer until the Packers score.”

The Packers were shut-out against Baltimore this week, which leaves me wondering if there are still people at this establishment angrily insisting they should get free beer until next week.

Still, not the biggest beer-related mistake in the NFL, this week. Miami Dolphins starter Rey Maualuga, who found himself in a dispute over a $40 bar tab at Florida’s unbelievably, ridiculously named Club E11even.

Any Place Named Club E11even Has Nothing But Mistakes for You

Rather than just pay the tab, the starting linebacker attacked his server, which resulted in his arrest and subsequent dismissal from the Dolphins squad. I mean, I get it: You play for the worst team in the league, you need your liquid analgesic. But damn, I once worked a liquor store and had some people run in and grab ~$40 worth of beer. Rather than chase them, I thought, “hey, $40 isn’t gonna make me risk my livelihood.”, And I was 21, probably stoned, and definitely stupid!

For more laughing at the mistakes of others, check these out:

The Five Most Absurd Week 10 Mistakes