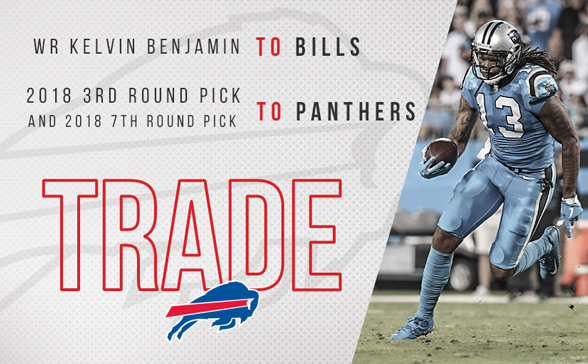 The NFL trade deadline this week was a lot of fun to watch unfold.  It is not every day you get to watch a team celebrate a trade that didn’t happen.  But for some, the landscape of their fantasy football rosters has been drastically impacted.  It is your job to figure out how to turn that to your advantage.

If you’ve read up on our guide to initiating fantasy football trades, you should be ready to go.  If you haven’t read it, I can only assume you are illiterate, so I will show pretty pictures for you to help guide you through the disaster that is your fantasy football roster.

Rather than tell you what players to target, we are going to go through the major events of week eight and figure out how to capitalize on what was the most exciting trade deadline in recent memory.  But most important of all, your assessments might not be the same as mine, so be sure to adapt these strategies according to your own evaluations.

Review: If you are like me, you are sick and tired of the constant back and forth between Ezekiel Elliott and Roger Goodell.  In my week nine waiver wire article, I told you what to do.  And the first time Zeke was suspended, I laid out a strategy.  Nothing has really changed, except that I have had to constantly scramble to add Alfred Morris and Darren McFadden multiple times in fantasy leagues and I now hate Ezekiel Elliott with the fire of a thousand suns.

Review:  At the NFL trade deadline, Jay Ajayi was traded to the Philadelphia Eagles for a 4th round pick in the 2018 NFL draft.  With the well-documented issues LeGarrette Blount has had in the past and with the emerging reports of problems with Jay Ajayi, I can only assume that the Eagles are striving to have the most unlikable backfield in football.

Fantasy Impact: If you owned shares of the Miami Dolphins offense, I don’t know if you could become more screwed than you already are.  They are a bad offense and the only offensive contributor on that team has been Jarvis Landry.  Nothing has changed.  No sane person wants anything to do with that offense.

In regard to how this affects the Eagles, that is the million-dollar question.  The addition of Ajayi raises some questions as to how the running game will be affected going forward.  This almost certainly eliminates the already diminished value of Wendell Smallwood.  The question is how will this affect Blount and Ajayi.

Strategy: First, I need to evaluate how I believe both running backs will be affected.  To be quite honest, I don’t actually think this will have any real impact this season.  I have always felt that Jay Ajayi was overrated based on a couple of really outstanding games last season.  For the most part, he has been consistently mediocre.  As for Blount, while I am not his biggest supporter, I do think he is better than Ajayi.  He has been a decent low end RB2 option.

The only move I would make here is seeing if I could buy low from an owner who might be panicked over this.  I suspect an Ajayi owner will look at this trade as a good thing, as Ajayi certainly can’t get much worse.  I also think a Blount owner might be nervous, because he is already a questionable commodity to hold onto and it looks like he will be losing touches over this.  If I could buy him for a flier on my bench, I’d do it.  But I wouldn’t give up too much of value, because the risk inherent with him is too great.

Fat Kelvin and All You Can Eat Wings

Review: Perhaps the most significant trade from this weekend is the Carolina Panthers trading Kelvin Benjamin to the Buffalo Bills for a 3rd and 7th round pick in the 2018 NFL draft.  Kelvin Benjamin finally gets to go to the home of all-you-can-eat wings. He is living the dream.

Fantasy Impact:  I don’t know how to illustrate just how bad the Buffalo Bills receiving corp is, except to say that when the Chicago Bears cut Deonte Thompson, the Bills couldn’t wait to add him to their roster.  The Bills were actively seeking out a wide receiver that the Chicago Bears DID NOT WANT.  This is a move that should increase Kelvin Benjamin’s value significantly.

On the Carolina Panthers side of things, this makes Devin Funchess the de facto number one wide receiver. Unfortunately, this means very little, as all Kelvin Benjamin managed to produce were low end WR2 numbers all season.  It is also worth noting that Greg Olsen will be back in a couple of weeks, and he is the true number one receiver in Carolina.

Strategy: My goal here is simple.  I want shares of Kelvin Benjamin.  I believe getting out of Carolina will be the best thing for him.  He is the number one guy in Buffalo by a long-shot.  I will be reaching out to the Benjamin owner and seeing how he feels about this trade.  If he is high on Kelvin, I probably won’t pursue anything, because he probably believes what I believe, and it will cost too much.

If the Benjamin owner is worried, I will be looking to create a package deal that nets me Kelvin Benjamin.  I’d probably look to offer a second tier player coupled with a flex player to make something happen.  If that seems like a lot, that is because of how high I am on Benjamin.

Kelvin Benjamin has one of the most favorable second half schedules for the rest of the season.  He will only face one defense that ranks in the top ten defending wide receivers.  I believe, at worst, Benjamin will close out the year as a top 20 receiver in the second half of the season.