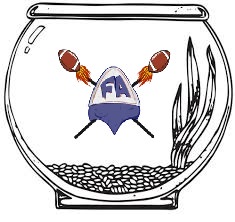 Do you like fun? Sign up for our free fish bowl league. Win prizes! Fill that aching July fantasy football void! Deadline 7/8/19

A fantasy writer named Scott Fish has been running a league for several years that has garnered the attention of experts and fans alike. This is because the Scott Fish Bowl league has shown that it’s quite possible to eliminate a lot of the random screw-jobs that plague FF, while still maintaining all of the fun. Screw jobs like missing the playoffs because your rival got late-season matchups against people who didn’t start their teams, seeing your opponent score massive ppr points from a QB who keeps dumping it off to his RB for 0 yards, a team getting ridiculous trades through nonstop spamming, and kickers (everything about kickers).

All it takes is a RIDICULOUS number of teams in the league.

Here’s how it works (almost every setting mirrors the Scott Fish Bowl):
– The league will have a LOT of teams, average has been 48 teams

– The only primary differences come in playoff selection: Head-to-Head record only matters in determining the top seed. Everything else is done by points scored in relation to the entire league. That’s right, all the randomness of bad matchups, teams quitting, and other small sample size nonsense is eliminated. NOTE: New rule to parallel a new rule in SFB: If you win 9 games, you will be added to the playoffs if you don’t qualify

– Scoring settings reflect the most cutting edge schools of thought. You don’t like PPR because a player can get a bonus point for catching a pass at the line of scrimmage and getting instantly tackled? That’s gone. Instead, we use the much more representative metric of, “half a point per reception, half a point for a first down” Again, these scoring settings mirror the Scott Fish bowl. Also of note: TE’s get double the PPR and First down bonuses.

Start Date: July 9th at 11 EST, provded we get enough teams by then. This is a SLOW DRAFT. Each player will have 8 hours clock time to make each pick. Draft timer will be paused between 2AM-8AM EST every day. There’s no way to coordinate a time when everyone can do a fast draft, and this also helps kill the time during the NFL’s “dark period.” If you time out twice, your team will go on auto-draft until you directly contact me.

Position Settings: 1 QB, 2 RB, 3 WR, 1 TE, 4 Flex (can flex 1 QB), 11 bench. NOTE there are no Kickers, Defenses, or Trades. You are all busy people, and deserve better than to have to spend your time reviewing potentially-BS trades, and working the waiver wires for kickers and defenses.

Disclaimer: Though you have to use an email to sign up for Fantrax, we won’t do anything with it. No mailing list, no signing you up for sketchy penile enhancement offers, nothing. We’ll just use it to track you down if you win a prize. Speaking of which…

First Place: You will get to choose between several glitzy championship rings. Who has one thumb and is proudly displaying his 2018 Fish Bowl Championship ring? 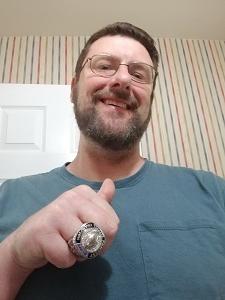 Second Place: Pizza Party! We’ll order two pizzas for you to pick up at a place near you, with whatever toppings you want. We get to choose the place based on whatever coupons we can find, but it won’t be a pizza place named after a roman emperor

Third Place: We’ll send you an autographed copy of my nationally-published book, Teaching with Comedy. It’s a funny workbook that teaches you how to use basic Hollywood jokewriting formulae to get even funnier. Plus, we’ll throw in this copy of “Fantasy Football for Smart People” we have kicking around, so this prize is on-theme.

Fourth Place: Fantasy Football T-shirt. Not sure if it’ll be a Football Absurdity shirt or just a cool FF shirt from Amazon, but we’ll give you some options to choose from

Fifth Place: Fantasy Football Coffee Mug. Same as with fourth place: We’ll give you some choices. 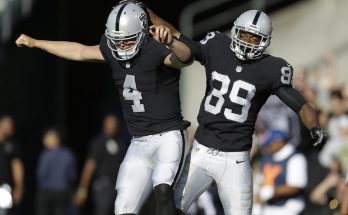