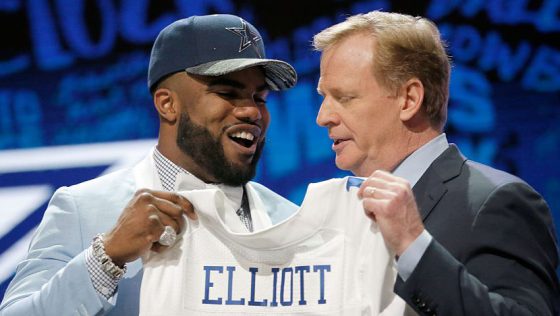 America’s favorite soap opera, the NFL, has seen a dip in ratings the past couple of seasons.  And frankly, I’m not surprised. Personally, I think the NFL has finally jumped the shark with this second injunction storyline.  Really, guys?  Two injunctions in the same season?  This whole Ezekiel Elliott suspension plot is very contrived.  We’ve seen it before with Ross and Rachael.  We know where this whole Ezekiel Elliott Roger Goodell fight is going.  Why don’t they just kiss already?

I was worried when they began this season with such a heavy focus on Goodell investigating domestic violence.  It seems like every couple of seasons, they put Rog into the same zany situation.  Guy falls in love.  Guy has his team of investigators delve into the shady background of his new love interest.  The new love interest rebuffs his advances.  It’s really frustrating when one of your main characters never learns from their mistakes.

But I’ll admit that this time felt like it could be different. Remember when Zeke jumped into the Salvation Army kettle?  It was like Zeke was telling Rog, “I know you like people to follow the rules, but I play by my own rules.” It was just the kind of jolt Rog needed!

And then in the very next episode, he suspends Zeke for ‘a pattern of poor judgement and behavior.’  As far as I’m concerned, his only poor judgement was falling for an emotionless jerk like you, Mr. Roger Goodell!  I mean, he did that to Zeke after meeting crazy uncle Jerry!  Who does that?

Zeke could’ve given up on Rog right then and there, but Zeke isn’t a quitter!  No, he is not.  He went right up to Rog and filed an injunction.  He told Rog with his heart and his soul and his lawyers that “You aren’t getting rid of me that easily!”

Now the story has gotten completely away from the writers.   Rog suspended Zeke for six episodes.  Then Zeke block the suspensions.  And in the last couple of days, Rog vacates the injunction.  And now Zeke is blocking the suspension again.  Talk about lazy writing.  How about trying something new?  Like playing some Peter Gabriel on a boom box outside Rog’s house.  I don’t think that has been done before.

And while I think Zeke has the acting chops to pull off this storyline, I’m just tired of seeing the same story over and over.  Remember when Rog got upset at Tommy for his deflated balls?  They had this exact same plot last year!

I really think the NFL isn’t going to get any better until they give Rog a chance to grow as a character.  Why doesn’t he ever learn from his mistakes?  We’ve had him for 11 seasons, but he just keeps getting into the same wacky hijinx.  After a while, it just gets old.

But as much as I complain about my favorite soap opera, I know I’ll keep coming back.  I’ve invested too much time into these characters to just quit now.  And I’ll admit that I’m curious where this Ezekiel Elliott suspension story goes.  Can Rog and Zeke work it out?  I just hope they don’t completely screw this up like they did with the Casino Ray plot.