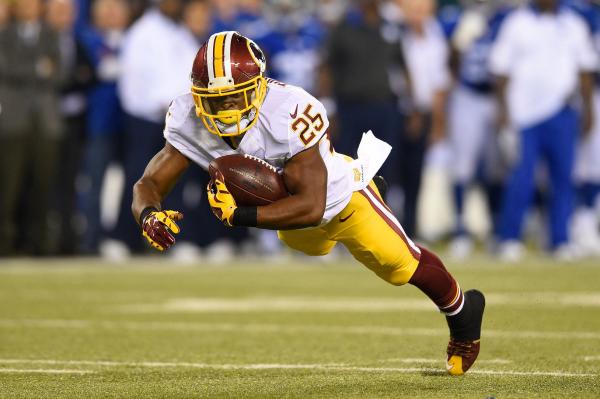 This week my co-worker, Jeff Krisko, suggested that starting Mike Gillislee is the smart fantasy football play.  I must admit that I admire the faith required by Jeff to believe that he can predict how a Bill Belichick running back will be used.  Myself, I prefer picking my running backs from teams that don’t have five to pick from.  That is why this week, I would start Chris Thompson.

The problem with Gillislee is that he is completely touchdown dependent.  While Jeff points out Gillislee’s red zone usage, he is still only averaging 12 carries over his last three games.  So at his average of 3.6 yards per carry, you are looking at a floor of 43 yards.  And that is if he performs at average!  What is he underperforms?

And the fact of the matter is, the Jets aren’t the pushovers they thought they would be.  They have a winning record five weeks into the season, despite having one of the worst offenses in football.  And even though they have given up the 4th most fantasy points to running backs in standard scoring leagues, 40% of those points have gone to receiving backs.  Through five weeks, Gillislee has zero receptions.

While Mike Gillislee might seem like a solid starting option in week five, there is a lot to be concerned about. If you want to look at a running back who has a much more favorable match-up and more big play opportunities, you should look to start Chris Thompson.

With Rob Kelley unlikely to play, Chris Thompson will only have to compete with Samaje Perine for carries.  Perine is only averaging 3.1 yards per carry and has looked very pedestrian in his limited opportunities.  And while Thompson’s limited opportunities in week four might concern his owners, it’s important to realize that Washington was dominated by the Kansas City Chiefs in time of possession.  The entire Washington offense was limited because they never saw the field.

Moreover, the 49ers will be playing in Washington, meaning they have to fly across country for this game.  Teams historically perform poorly when making this type of trek.  And when considering that San Francisco is the worst team in time of possession this season, it is hard not to like the opportunities provided by Chris Thompson.

So if you want to roll the dice on a touchdown-dependent running back who is in a timeshare, Mike Gillislee is the guy for you.  However, if you want a running back whose only competition for touches is a rookie running who has looked mediocre at best, you might want to start Chris Thompson.