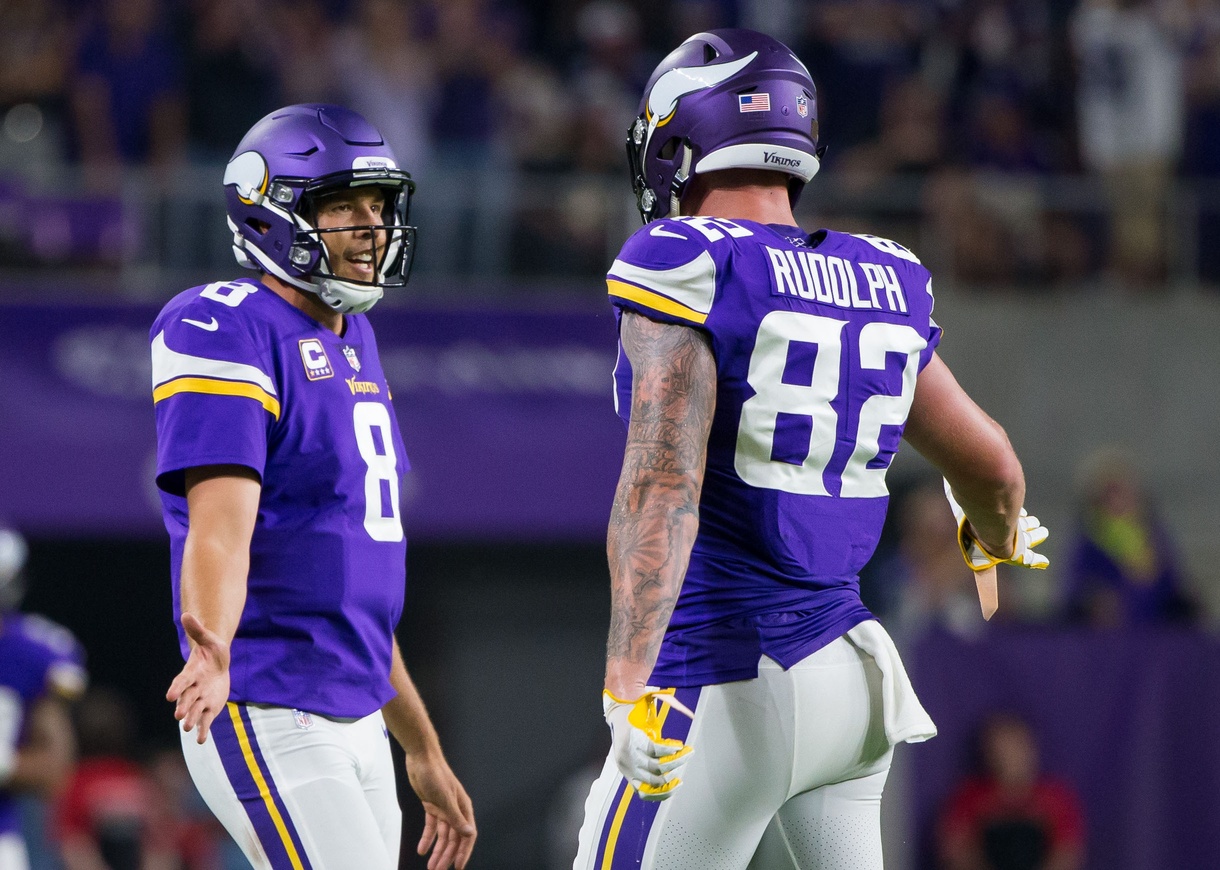 [NOTE: Since this article was published, the Vikings announced that Bradford underwent an MRI for a knee issue. This might limit his mobility aganst a good Steelers pass rush. I no longer believe Bradford to be a good play. If you are looking for someone to stream instead, I would suggest our quarterback streaming article].

It wasn’t all that long ago that Sam Bradford was a footnote at best and a punch line at worst. The former first overall pick flamed out of St. Louis, err, Los Angeles, uhm… St. Louis and lasted only one season in Philly before being traded on the eve of the 2016 season to the Vikings. His times with the Rams were absolutely dreadful—3.4% touchdown rate and 2.2% interception rate. While the interception rate is basically fine (similar to 2016 Drew Brees and Joe Flacco), that career touchdown rate is so low it is sub-2016 Josh McCown.

Sam Bradford was mostly Sam Bradford with good coaching last season, but he had a significant disadvantage since he had the NFL equivalent of being shaken awake and handed a football and told to get out there. I mean, they didn’t even have pads that fit him properly. Bradford channeled his inner Alex Smith (2005 -2016) last season, game managing his way to 13 touchdowns and three interceptions while averaging 242 yards per game in his first eleven games. In the last four games last year, Bradford channeled his inner 2017 Alex Smith, averaging 304 yards, 1.75 touchdowns and 0.5 interceptions per game. Tack on his Monday Night Football shellacking of the Saints and that figure goes up to 312 yards per game, a couple TDs and two picks in five games.

The emergence of Adam Thielen and growing rapport with Stefon Diggs gave Bradford weaponry he’s never had last season. Toss in perennial breakout candidate Kyle Rudolph, who finally broke out, and dynamic rookie Dalvin Cook and Bradford has more weapons in Minnesota than in his entire tenure with the Rams; even his offensive line looked impressive in week one.

The Steelers traditionally make for a difficult matchup for quarterbacks, and the addition of the other Watt certainly doesn’t make things easier for their opponents. Still, they gave up 222 yards, two touchdowns and a #7 week one quarterback rank to a Browns rookie quarterback and a receiving corps without a receiver who could crack twenty snaps on the Vikings. While Kizer’s fantasy day was buoyed by a rushing touchdown that Sam Bradford would only dream about, Bradford should still do well enough to start against them.

Obviously, there are concerns here. The Vikings are starting zero players in the same place along the offensive line as they did last season, and the Steelers sacked Kizer seven times without Bud Dupree or Stephon Tuitt. Dupree may or may not be back Sunday, but Tuitt will be out after a biceps injury forced him from the week one game early. The offensive line looked strong, and the Vikings’ game plan is built around a ton of quick hitters to keep your defense honest.

Going into week two’s waiver wire period, Bradford was owned in just 26% of Yahoo! leagues, so he’s basically nobody’s QB1 at this point. If you want to try to ride the wave from last week, or if you’re working on streaming waiting for Andrew Luck, you could do a lot worse than Bradford. He won’t light up the Steelers, but he will provide back-end QB1 numbers this week against Pittsburgh.

One Comment on “Fantasy Football: Start or Sit Sam Bradford in Week Two?”