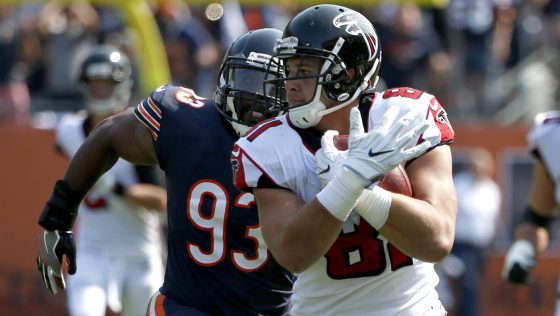 We are one week into the football season and you are already finding yourself staring into the abyss that is the tight end waiver wire.  What’s a man to do?  Unfortunately, I am not a miracle worker and the pickings are always going to be slim when it comes to tight end.  So let’s take a look at the best candidates available on the waiver wire.

Jesse James – Owned in 8% of leagues – Jesse James broke out this week with 6 catches for 41 yards and 2 touchdowns.  Don’t let those numbers fool you.  Last year, Cleveland gave up the most fantasy points to the tight end position by a significant margin.  In his previous season, Jesse James only had 39 catches for 338 yards and 3 touchdowns.  Everything points to him regressing to his career average, so let someone else waste their waiver wire on him.

Zach Miller – Owned in 5% of leagues – I cannot in good conscious recommend spending a waiver wire pick on Zach Miller.  His stat line of 4 catches for 39 yards was pretty unimpressive.  What I will say is that you should definitely put him on your watch list.  Last season, before he got hurt, he was on pace to finish the season as a top ten tight end.  This season, the Bears just lost their starting two wide receivers.  Zach Miller might be the only person left on the Bears who can catch a pass.  So definitely take a wait and see approach to him.

Other notable tight ends to monitor

Even Engram – Owned in 24% of leagues