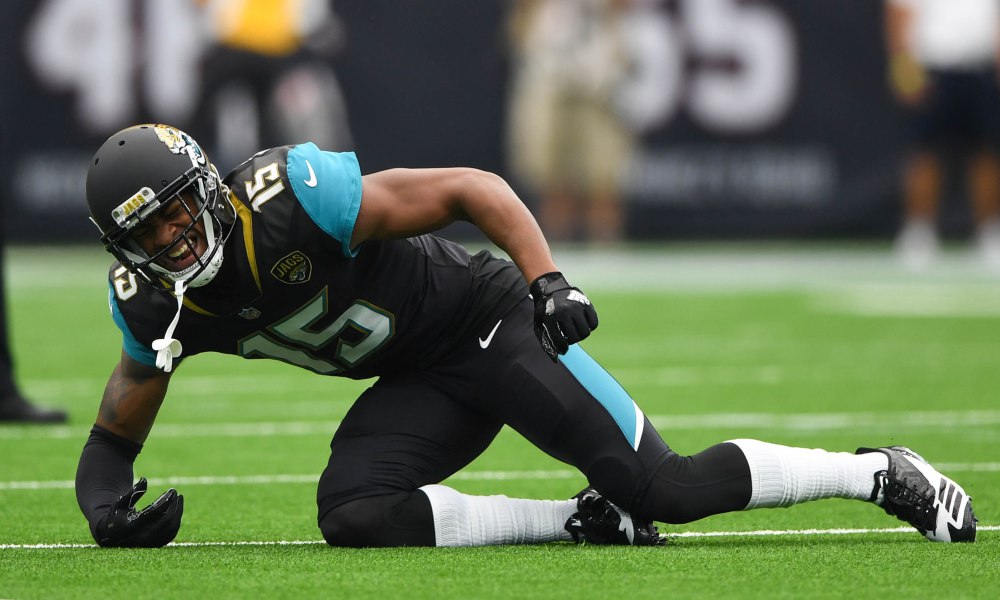 We are one week into the fantasy football season and panic mode has already set in for a few owners.  While the fantasy death of Ezekiel Elliott appears to have been greatly exaggerated, Allen Robinson’s lack of an ACL has left many without hope.  When you see someone in your league suffering, there is only one thing you can do – try to exploit his weaknesses to make your team better!  So let’s take a look at potential trade targets in week two and keep an eye out on guys we should scout for future weeks.

David Johnson — The main story of Week One in fantasy football is the death and dismemberment of everyone’s first overall pick, David Johnson. The odds of him being fantasy relevant this year are the same as the odds of my supermodel co-worker deciding she needs to have a tumultuous love affair with me – non-existent.

If you own David Johnson, don’t panic and figure out who you can target on the waiver wire.  If you don’t own David Johnson, find the guy who does and make a point of offering to help him through his troubled time.  While you are at it, you should try to help yourself to some of his better players.

Kerwynn Williams, Andre Ellington and Chris Johnson all look to be in a time share.  Right now, Kerwynn Williams looks to be the guy who will get the bulk of the looks, but I recommend looking elsewhere for help, as this situation looks to be a disaster.

Allen Robinson – After tearing his ACL in the week one opener, the big question is who will see the extra targets in Jacksonville.  Both Marqise Lee and Allen Hurns saw four targets in week one, but only Allen Hurns proved able to catch the passes thrown his way.  While both Hurns and Lee will see an uptick in value, it is doubtful that either will become fantasy relevant while Blake Bortles is throwing them the ball.

Odell Beckham Jr. – ODB is still being listed as day to day and if we learned one thing last week, it is that you can’t rely on the other New York Giants receivers without Beckham to draw away coverage.  Find yourself a streaming option, just make sure they aren’t a Giant.

Danny Woodhead – Reports are that Woodhead will be out for at least a month.  It appears that the direct beneficiary of those targets is going to be Javorius Allen, who had 21 rushes for 71 yards.  However, Michael Campanaro is getting some buzz, so you will definitely want to monitor the situation.

Kevin White – If Kevin White is an actual notable injury to your team, there is not much my advice column will do to salvage what is clearly a terrible fantasy roster.  I mean, Kevin White?  What were you thinking?  It wasn’t about winning, that’s for sure.  I’m a Bears homer and even I couldn’t convince myself to draft him.  You really should be ashamed of yourself.

C.J. Fiedorowitz – Same as the above two with the amendment that tight ends are not people.