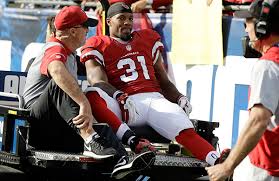 We are one week into the football season and you were a Rex Burkhead truther who just discovered that everything is a lie.  What’s a man to do?  Fear not, because one man’s draft disaster is another man’s waiver wire opportunity.  So let’s take a look at the best candidates available on the waiver wire.

Tarik Cohen – Owned in 15% of leagues – If you watched any of the Bears/Falcons game, you probably hated yourself for having to subject yourself to the Chicago Bears offense.  One bright spot was the play of Tarik Cohen.  The man had 116 combined yards and a touchdown.  Even more interesting, he saw 28 snaps to Jordan Howards 38 snaps.  It is clear that the Bears expect him to be a major part of this offense, and he looks exciting enough that it would be crazy not to pick him up.  Especially in PPR leagues.

Giovani Bernard – Owned in 17% of leagues – Lost in the camp battle of Jeremy Hill vs. Joe Mixon is the fact that Giovani Bernard is firmly entrenched as the Cincinnati Bengals 3rd down back.  He was on the field for 48% of the Bengal’s snaps, the most of any running back on that roster.  He is definitely a guy worth monitoring and should provide a nice high floor if you are desperate for running back help.

Chris Thompson – Owned in 17% of leagues – Chris Thompson is the 3rd down receiving back on a team that is very pass oriented.  Even more interesting, he split snaps with Rob Kelley.  He is definitely someone you want to monitor to see if his usage increases, but you might want to wait another week before pulling the trigger.

Kerwynn Williams – Owned in 9% of leagues

Alvin Kamara – Owned in 14% of leagues

Chris Carson – Owned in 16% of leagues

2 Comments on “Fantasy Football: Week Two Waiver Wire Running Backs aka My Back Likes to PPR All The Time”