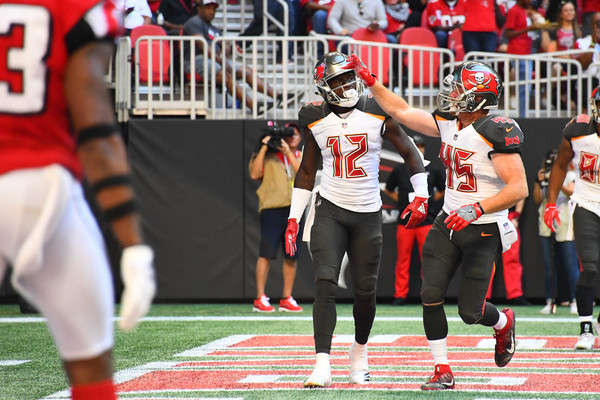 It’s that time of year once again! Football Absurdity will bring you a breakdown of every notable fantasy football-relevant player throughout June, July, and August. We continue with the wide receivers. Chris Godwin tore his ACL late last season, yet we still draft him like he’s going to be just fine? Why? Let’s take a look as I get mad at this fact in the 2022 Chris Godwin player profile!

Chris Godwin was objectively… pretty good last season. Prior to tearing his ACL, he played in thirteen games, averaged 7 catches for 81 yards, and scored 6 touchdowns in those thirteen games. He was on pace to finish as a top-eight wide receiver in PPR leagues. That all is fine and dandy, I am not questioning his pedigree. However, I am questioning the Pollyanna stance surrounding Chris Godwin when, at the current point in the offseason, we have literally no ETA for him as a player. The latest out of Tampa Bay (per Greg Auman of The Athletic) is that the Buccaneers are looking to make sure that Godwin is healthy enough when it matters (the stretch and the playoffs) and as such, aren’t looking to rush him back. He believes the highest likelihood this season is that Godwin is close, but not yet ready, at the opening of the NFL season. That means that he starts on the PUP, and misses six games.

So, the best case scenario in that situation is that Godwin comes off the PUP in week seven, and you get half a season of production from him, assuming zero setbacks in his recovery. Which, again, his recovery currently has no timeline and the Buccaneers do not anticipate having him ready at the opening of training camp. Remember Michael Thomas last season? This is sounding a lot like the best-case scenario for him, and we gleefully carried Michael Thomas for a couple of months before quietly putting him back on the waiver wire (after applying our makeup and clown wig).

Chris Godwin Salary Cap Value: $3
Draft Ranking: Find out for your league settings in a Beersheet!

So, apparently, we didn’t learn. At least, we didn’t learn in snake drafts, where Chris Godwin is WR20, pick 55 off of the board. Let me reiterate that, Chris Godwin (without a timetable to return) is the twentieth wide receiver off of the board, and only fifty-three players are deemed worthy of selection over him. Godwin goes ahead of Mike Williams, Hollywood Brown, Brandin Cooks, and Courtland Sutton. Say what you want about those guys, but at least they’re odds-on favorites to be playing football in week one. That’s more than you can say about Chris Godwin.

For salary cap drafts, he’s in the “if you want him, get him” range of players for me, at less than $3. That usually means someone bids, and either a counterbid ($2) or a counter-counterbid ($3) wins the day. I literally can’t get mad at spending a few bucks on any player (except Cyril Grayson, who is not a person). So, if you really want to have Chris Godwin on a roster, find your way to a salary cap draft, where you can get him dirt cheap. Please do not spend a fifth-round pick on him.

Chris Godwin misses less than half the season and averages 7 catches, 80 yards, and 0.5 touchdowns per game.

Chris Godwin misses the whole season due to a setback. No jokes in this one, folks… More like Chris Godlose. Okay, just that one.