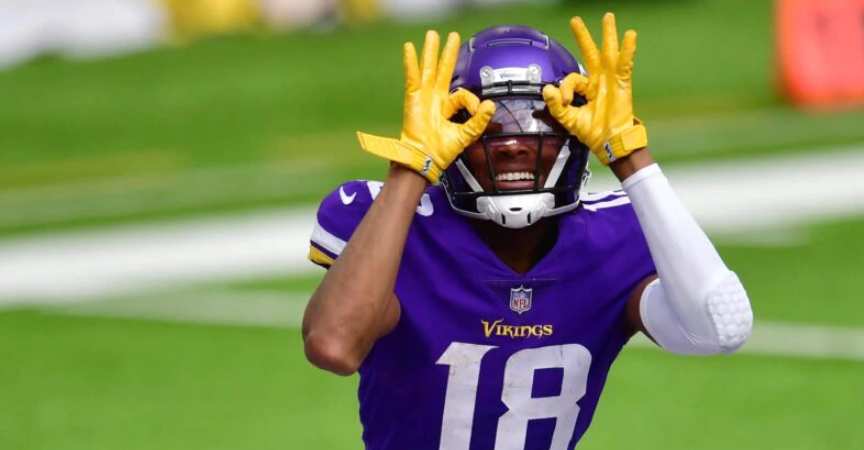 It’s that time of year once again! Football Absurdity will bring you a breakdown of every notable fantasy football-relevant player throughout June, July, and August. We continue with the wide receivers. Justin Jefferson is on the short list for best young, dynamic, and talented wide receivers in the NFL. He has a new coaching staff, but is that enough for him to overcome Kirk Cousins’ conservative nature to make him the #1 wide receiver in all of fantasy football? Let’s take a look in his 2022 fantasy football player profile!

The Vikings have a new coaching staff, with an offense built from the Sean McVay coaching tree. This is where I think that Justin Jefferson could put all of his skills and usage to good use in finishing as the WR1 in PPR leagues, as all he needs to land there is the touchdowns. And Kevin O’Connell just helped construct an offense that funneled 191 targets to Cooper Kupp, which led to a league-leading 16 touchdowns.

Justin Jefferson Salary Cap Value: $55
Draft Ranking: Find out for your league settings in a Beersheet! (coming in early July)

By ADP, Justin Jefferson is in a group of wide receivers that more-or-less draw a dividing line between the 1B tier of running backs (Dalvin Cook, Christian McCaffrey, and Najee Harris and the second tier of running backs (Joe Mixon, Nick Chubb, and D’Andre Swift). He’s my favorite of that group (Jefferson, Ja’Marr Chase, and Davante Adams). Chase has a shot at WR1 overall upside, the same as Jefferson, but his floor is much lower, given his predilection for amassing points via big plays and the four inches of height he yields to Tee Higgins in the end zone.

Justin Jefferson could be this year’s Cooper Kupp, and it wouldn’t even be that big of a leap for him outside of touchdowns. Kupp had 14 WR1 or WR2 games last season, and Jefferson had 11, just three behind him. Should Jefferson get the extra targets afforded to Cooper Kupp last season, the touchdowns should come, and he has an easy path to the #1 overall wide receiver in 2022.

Unfortunately, Jefferson is $58, and that is only a few bucks cheaper than Cooper Kupp in a salary cap draft, meaning that he is best seen as a consolation prize should you miss out on Cooper Kupp. After all, there’s no reason to skimp out on Kupp to get Jefferson.

I laid all the reasons out that Justin Jefferson could be WR1 this year. Those all come to fruition.

Kirk Cousins literally puts the COVID-19 bubble around him this year but doesn’t make any consideration for throwing the football. He refuses to remove it and every snap turns into a rugby scrum as it clanks off the bubble. Somehow, Jefferson still gets 1,200 yards.