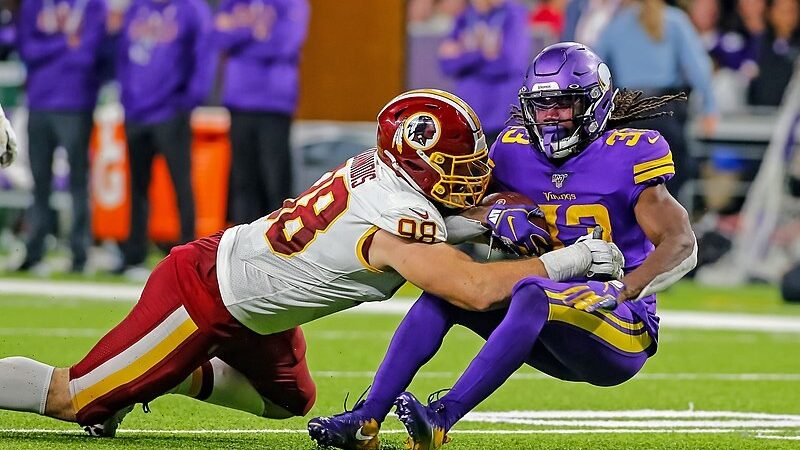 It’s that time of year once again! Football Absurdity will bring you a breakdown of every notable fantasy football-relevant player throughout June, July, and August. We continue with the running backs. Today, we take a look at Dalvin Cook, who has been one of the best running backs in the league, when healthy. Unfortunately, he hasn’t played a full season to this point, and if makes you wonder if he will. With the Vikings trading in their coaching staff for a branch of the Sean McVay coaching tree, what can we expect out of Dalvin Cook for 2022 fantasy football leagues?

Dalvin Cook seemed to actually take a step back last season, for the first time in his career. Despite missing four games, he still managed to rank in the top five in carries, so he got a ton of workload. Cook averaged 21.8 touches per game, making him over 20 touches for three-straight years, but he turns 27 this offseason, and 27 is the new 30 in terms of running back cliffs. While Cook averaged the second-highest number of carries in his career, he averaged the fewest targets and receptions, meaning that the Vikings utilized him more like a traditional running back than the dual-threat that he is. This explains why his yards per game dropped precipitously from 2020 to 201, going from 137 yards from scrimmage to 106 yards from scrimmage.

It’s highly possible that we’ve seen peak Dalvin Cook, and it’s also highly possible that the incoming coaching staff sees this, as well. Dalvin is entering his sixth year and has missed multiple games every season of his career. Fantasy managers haven’t worried too much about this, since Alexander Mattison is one of the best handcuffs in the league. But, here’s the thing, the Vikings coaching staff isn’t paid for fantasy stat bonuses; they are paid to win. I worry and wonder about the new staff deciding that instead of getting 280 touches out of Dalvin Cook across 13 games, they’d rather get 270 touches out of him across 17 games. That means dialing his touches back and dialing up Mattison’s. This would be a departure for them, as the McVay system has traditionally been built around driving one back into the ground and snagging the next one.

But, there’s another hallmark of the McVay system that makes me worried about Cook, even if his touches don’t go down: the Rams have been bottom-three in targets to running backs in each of the last three seasons (4.1 targets per game to all backs), whereas a large part of Dalvin Cook’s value comes from averaging… 4.1 targets per game in that timeframe. I worry we end up with a part-time grinder with Dalvin Cook, and that’s what gives me trouble.

Dalvin Cook Salary Cap Value: $58
Draft Ranking: Find out for your league settings in a Beersheet! (coming in early July)

Dalvin Cook has quite a few question marks surrounding him, enough for me to push him into the backend of my first round. It seems as though I am the only person who seems to think that Dalvin Cook might have some downside, as he is the RB5 by ADP on FantasyPros. I’m out at that price, as it is ahead of Christian McCaffrey, Najee Harris, and Aaron Jones, all backs I would rather have than Cook. If you’re in a position to take Cook and McCaffrey or Najee are there, it’s a no-brainer to take those guys over Cook. I would also take Cooper Kupp, Justin Jefferson, or Ja’Marr Chase over Cook.

It’s nothing against Dalvin Cook, I just see his situation as a lot wobblier than a lot of people seem to see it. If he was a late-first or early-second-round pick, I would love the value, but as it stands, I’m out. Speaking of value, Dalvin is the fourth-priciest player, and third-priciest running back in salary cap drafts. No thank you, I would rather Christian McCaffrey for a few bucks less, or Joe Mixon for $7 cheaper. We all have the same $200 to spend, and it’s up to us to decide how to spend it. For me, I’m not spending my hard-earned Fantasy Football Fun Bux on a guy I have a lot of questions about, not when there are guys I feel better about in and around the same price point.

Dalvin Cook plays a full seventeen games and finishes the year as RB4.

Dalvin Cook plays a full seven games and finishes the year as RB34.