All Rise for the Fantasy Football Auction Mock Report for June 19, 2020!

“Will you mock a little faster?” said an owner to a drafter,
“There’s a player I hate still on the board, I want to nominate him after.
See how eagerly the mockers all jump bid!
They are waiting on absolutely no one—when the steals come they’ll wish their moves could be undid!

June’s here and, if you’re like me, that means only one thing: Long, hot days in the backseat of a police car. But there’s hope on the horizon: The 2020 NFL season actually seems possible, almost likely. I’ve been tackling my fantasy football auctions with much more gusto than ever before. Naturally, the trends I pointed out in May are still, um, trending. Plus, with interest in football picking up, there’s more info to be had.

First, the obligatory answer to, “why am I any more qualified than some other fantasy football auction writer?” Here, shove this pic of my battle-station into your brain hole: 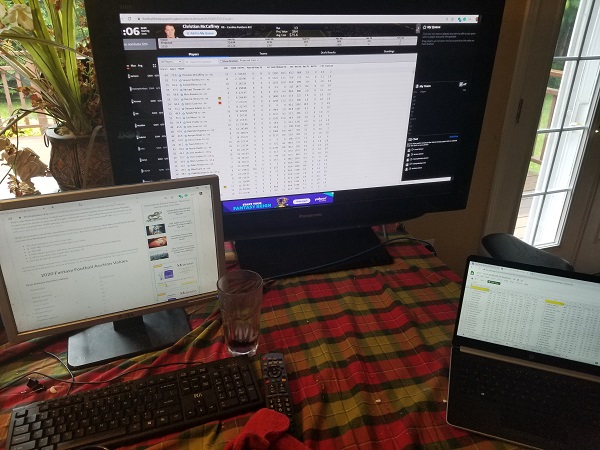 But, navigating the seas of mock auctions can be tricky, and can sometimes even give you misleading data. These things take upwards of 90 minutes, you don’t want that time squandered. With that in mind,  here are three tips to maximize your early fantasy football mock auctioning experience:

Unlike snake drafts, you can’t really program a computer to be good at auctions (well, they could if they would just program my BBQ strategy). For the popular mock auction sites, computers will just bid until they have three high-end guys and barely any money left. This hugely rewards the strategy of getting one or two high-end players then just waiting and cleaning up on steals starting about a quarter of the way into the auction.

While waiting on steals is a viable strategy, and your auction strategy should incorporate getting at least a few steals, all it takes is ONE other human sandbagging for deals and, all of a sudden, you’re getting bid up to the market value on those players that the computer can’t afford to touch.

So you’ll definitely want all your mock auctions to have at least two-thirds human players. But getting this can be hard, go to the mock rooms of Yahoo! and ESPN and you’ll probably see only a handful of humans signed up. However, I’ve developed an effective strategy for getting auctions filled up.

First, don’t sign up for the next auction, sign up for one that’s happening after the upcoming round of auctions fire. Yahoo! launches all its auctions 15 minutes apart, so if the next round is in 7 minutes, sign up for an auction in 22 minutes.

When you sign up, it will take you to your own auction screen. Go back to the main auction room and keep an eye on it. A lot of people are now working from home and can have the mock signup room open in another tab or device.

When your auction is one minute from firing, take a look at the attendance. If it’s not 2/3 or more, see if another auction that is about to fire has that ratio. If so, go there, if not, move to a later auction room. You’ll find this creates a snowball effect: Most of the people signed up for auctions only want one with humans, so they’ll migrate to later auctions in groups of growing size.

It takes some time, but it’s worth it to get mock auction data and experience that actually simulates the competition you’ll be facing in real auctions. 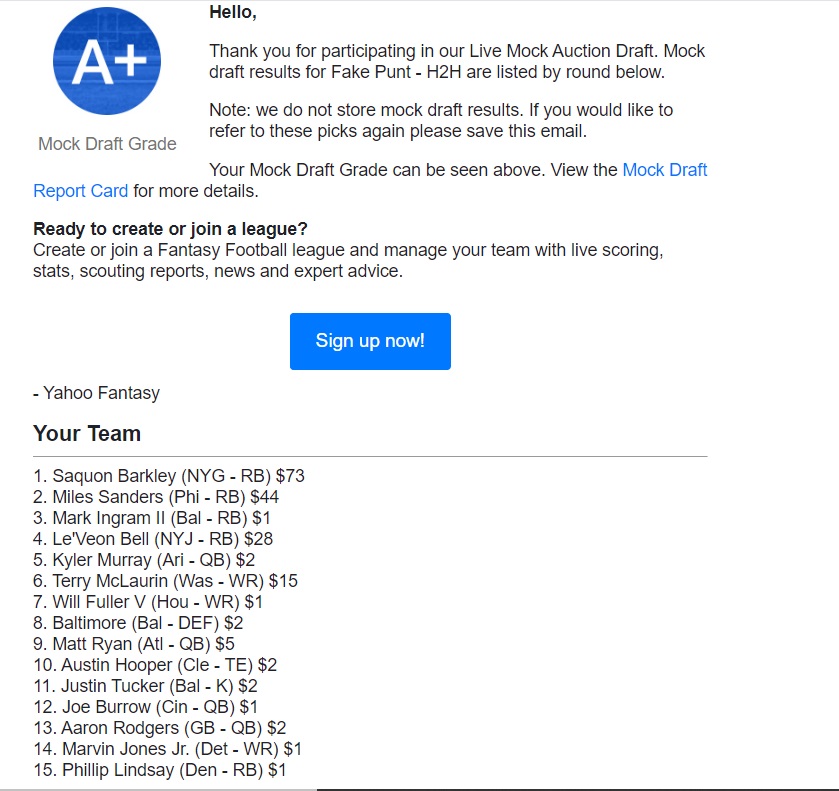 I drafted 3 mediocre WRs and 3 backup QBs, yet Yahoo! rated my auction A+

The rate-my-draft tool at Yahoo! and FantasyPros is fun, but should only be used for novelty purposes. It usually gives me a rating in the high 90th percentile, but sometimes this will be for a team that I think really needs a lot of work. Show your roster to real people: If your friends aren’t into fantasy this early, hop into our Discord and a bunch of us will be falling over each other to discuss your roster.

Tip 3: Try to Get Some Productive Discussion Going in the Chat 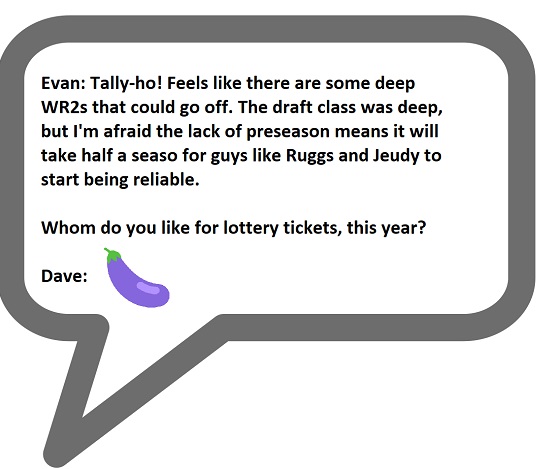 Now, obviously, some times the in-auction chat will have a sad person or two who can’t have a real internet conversation without trying to start a flame war. Try to just ignore that person. Usually, the chat will have ten people who are so insightful into fantasy football auction that they are auctioning in June (like you). That’s some good input, we can all benefit from sharing our strategies and hearing the tips others are using in 2020. After all, the only other sources for this are a small smattering of auction advice articles and our buddies who will probably be in the real auction with us (and should, therefore, know NO SECRETS).

Finally, know that I’m happy you are doing an auction, if it’s your first you are in for a huge thrill. And I’m happy you are practicing: The best fantasy football moments for me are when I have a good strategy or team and throw down against an extremely competitive and prepared league.