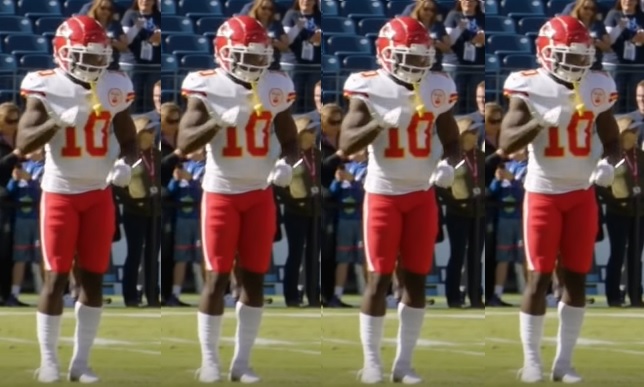 As we gear up to the start of the NFL season, Football Absurdity is going to bring you a comprehensive breakdown of every notable player that will be available in fantasy football drafts. We only look at the past three seasons for a player. This is because anyone who is looking at data from 2016 to figure out what to do in 2020 had better be some deviant who was unusually excited by that reboot of The Muppets. Tyreek Hill’s injury made him unable to repeat his 2018 #1 WR campaign, but he did finish 6th in points per game for 2019. Any chance of him falling off in 2020?

For three years, Hill has been in the elite pantheon of WRs alongside Michael Thomas, Julio Jones, DeAndre Hopkins, and the winged Greek God, Hermes. This year thinks shouldn’t be much different, as the only thing that kept him from superstardom once again was two fluke injuries. Tyreek Hill suffered a clavicle injury that cost him time, and Patrick Mahomes missed some games and was hobbled thanks to a pesky kneecap that just didn’t want to stay in place.

The Chiefs drafted a lesser version of Hill with Mecole Hardman, but Hardman poses no threat to Hill. Hill’s in the upper stratosphere of wide receiver, and there isn’t much to say about him other than telling you that you’re in for a treat if he ends up on your fantasy football roster at this draft.

Hill is as safe as they come and should be the third wide receiver off the board. If he falls to you in one of the few picks at the end of the first round, grab him. There are a ton of RB1s so you can easily round out a Tyreek Hill pick like a bathtub full of mixed vegetable rounds out Cap’n Crunch to make a “complete” breakfast. Keep in mind if you are drafting Tyreek Hill in the first round that running backs fall off a cliff early after about the third round, so don’t get visions of pairing him with another top WR or a top-flight tight end or quarterback, because you’ll be kicking yourself come week seven or eight when you’re trying to decide between Duke Johnson or Travis Homer as your RB2.

Yet another top-six fantasy finish, and you develop the sociopathy needed to cheer on a wretched human being.

Last year was the worst-case scenario: Injured for 4 weeks then scored 8 points or fewer in half of his starts. Hey, I told you to pick him third.

[Photo Credit: https://en.m.wikipedia.org/wiki/File:Tyreek_Hill_2019.png under cc-2.0]
[Statistics are sourced from pro-football-reference.com and airyards.com]